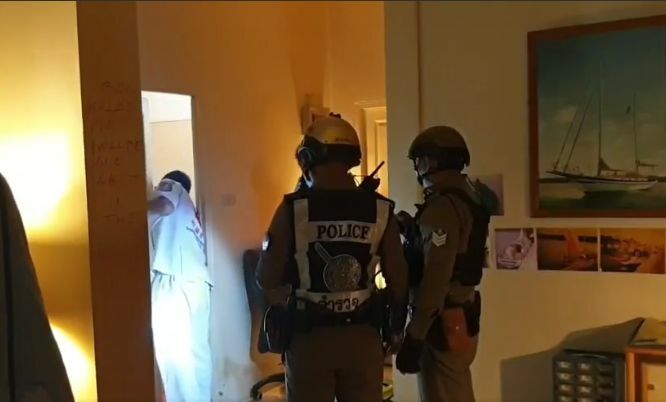 A 74 year old Norwegian man has been found dead in his Pattaya home’s toilet over the weekend. Police say they were horrified at the scene of the man’s death on Saturday evening. The man had cuts on his wrists, a slit throat, and he was hanging on a rope that was connected to the ceiling with a pool of blood beneath. The man’s home was in the Bang Lamung district ,east of Pattaya.

In front of the toilet there was a handwritten note on the wall in red reading… “Ben killed me. I will be one ghost in the house 100%” Another note was found by his body, also in red, saying the same thing found on the wall but with an additional sentence “Give this to Ben”.

A 43 caretaker said she had been trying to contact the man for several days but was unable to reach him, so decided to pay a visit. Nobody answered the door when she knocked, but when she entered the house she saw his lifeless body hanging in the toilet. She then contacted police who arrived around 11:30 at night. He had mentioned chronic diseases to the caretaker in the past, without being specific.

Police are treating the case as a suicide at this time. His body was taken to hospital for an autopsy.

Benroon
On 5/11/2022 at 4:15 AM, Soidog said: Yes I have a similar concern for my friends who use this method of remaining in Thailand. When I ask them about it they all claim they are not worried and that there…
Benroon
On 5/10/2022 at 8:03 AM, analog said: Makes me wonder if I should move back to my home country while I'm still young, in my 30s. If you are able to live in Thailand in your 30's you would be…
Benroon
22 minutes ago, Golden-Triangle said: Well, I have the funds in my account, the only reason I use an agent is to avoid all the unnecessary paperwork, I really do wish that they would streamline the process, 1 form, show…
Polkadot
On 5/10/2022 at 2:26 AM, joseph said: If I ever had mentality to commit suicide I would travel north I procure the proper ingredients for a peaceful departure. Slashing ones throat, wrists and hanging seem a bit redundant. …
Polkadot
On 5/11/2022 at 1:02 PM, JustAnotherExpat said: Regarding political instability - around the year 2007 I made myself a "go bag" with passport, a small travel kit and $1000 USD cash in case some extreme event occured and made it…

Shootout between a drug dealer and police, 2 dead