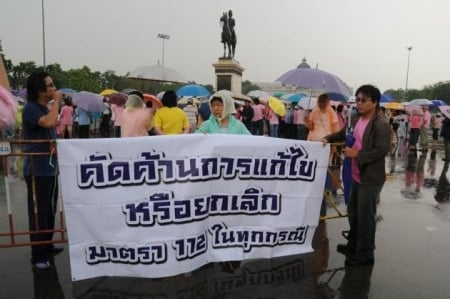 PHUKET: Opposition mounted yesterday to the Nitirat group of law lecturers and their controversial proposals regarding the monarchy.

At a reunion party, a group of Thammasat University law graduates called for the removal of five of the Thammasat university law lecturers who are members of Nitirat.

Representatives of the Law School class of 1958, including Suthep Niran and Sichart Sahatchote, led the call. They issued a statement calling for an end to Nitirat’s use of the university as a venue for its activities, and alleged that the group had defamed the Royal institution.

They said that since the lecturers were government officials but did not support Thai democracy with the monarchy as its head, they should be fired.

Former premier Chuan Leekpai, chief adviser to the opposition Democrat Party and a member of the class, said Nitirat was unlikely to succeed in amending the law.

In Phuket, another leading Democrat MP, Sathit Wongnongtoey, was busy mobilising party members to oppose the Nitirat group. He said Thais were facing “a new security threat” – the distortion of information about the monarchy institution to make it look bad. More dissemination of correct information was needed, Sathit said.

Earlier yesterday, Democrat MP for Bangkok Jittapat Piromphakdee led a group of royalists to stage a demonstration against Nitirat’s move to amend the lese majeste law at the Royal Plaza.

The demonstration, at Bangkok’s Royal Plaza, was largely organised through social networking sites and the demonstrators swore allegiance to the monarchy. While the ritual was taking place, heavy rain poured down, leading some to speculate that “heaven is weeping”, and some people shouted, “Long Live the King!”

Jittapat said she was not sure what the next move would be, but she read out a statement to the crowd saying the monarchy institution must be kept in a position of reverence. She said that many people have received distorted information about the monarchy, leading to the current situation.

Meanwhile, Democrat MP and shadow PM’s Office minister Thepthai Senapong said the ruling Pheu Thai Party had made it clear at certain levels that they would not make a move to amend the lese majeste law. Whether people believed that or not was another matter, however, he said.

Thepthai said the lack of trust was related to the fact that many figures associated with the party, from former premier Thaksin Shinawatra down, had been embroiled in actions or words deemed as disloyal to the throne. He claimed that the convicted former premier often attacked the monarchy in interviews with foreign media.

Thepthai said the actions and movements of people like former Thai Rak Thai MP Jakrapob Penkair, key red-shirt member Ji Ungpakorn and Pheu Thai party-list MP Sunai Julpongsathorn made it less likely that people would trust Pheu Thai when it comes to the issue of the monarchy, no matter how many statements they made.

He warned that Nitirat also wanted to amend Article 8 of the Constitution, and other parts of it, and that the Democrat Party would oppose any such move. Thepthai denied that the party was trying to claim a monopoly on love for the institution of the monarchy.

Pheu Thai’s deputy spokesperson hit back yesterday, saying the Democrats had become obsessed with Thaksin and had made unfounded allegations. The spokesperson urged the party to be more “constructive”.