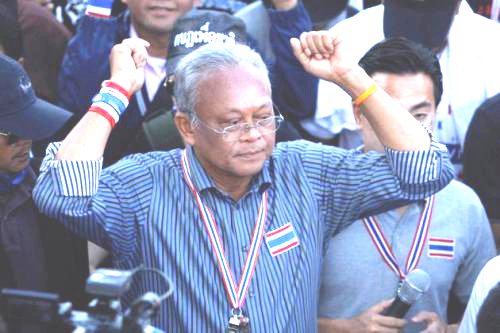 
Suthep turns down PM’s call for talks on poll delay
The Nation / Phuket Gazette
PHUKET: The caretaker government, having repeatedly ignored calls for postponement of the February 2 election, yesterday softened its stance as pressure for a delay in holding the poll increased.

He said Yingluck had consulted Phongthep, a legal expert, and some other Cabinet members on the EC’s proposal, which she felt was still unclear. She has assigned Phongthep to hold discussions with all the sides concerned.

Phongthep will invite representatives of five groups – the EC, political parties, people who want the election to go ahead, people who are against the February 2 election, and the Cabinet, according to Suranand. The discussion would be held tomorrow morning at a place to be confirmed later, he added.

However, PDRC leader Suthep Thaugsuban yesterday ruled out his attendance at any talks on a possible postponement of the election. He insisted his group would not engage in any such talks with the government until the protesters had “won the fight”. He repeatedly said earlier that his group wanted nothing less than the mass resignation of the caretaker Cabinet, including Yingluck.

Protest leader Suriyasai Katasila said yesterday in a Twitter message that the PDRC was still firm in its demand that Yingluck step down to pave the way for national reform. “Election postponement is not our main goal,” he tweeted.

Pichit Chuenban, a legal expert for the ruling Pheu Thai Party, said yesterday that legally speaking the election could not be postponed. However, the party wanted to hear views from those who were pushing for election postponement.

EC member Somchai Srisuthiyakorn expressed dissatisfaction yesterday at the government move to hold a multiparty meeting without first responding to the EC’s written call for postponement. “This is not the right thing for the government to do,” he said, adding that the prime minister should have a meeting urgently with the EC chairman to discuss any election postponement proposal.

He said if there was no such discussion between the PM and the EC chairman, it was likely the EC would not join the multiparty meeting to be held by the government.

Meanwhile, caretaker Foreign Minister Surapong Tovichakchaikul, who is also in charge of the government’s Centre for the Administration of Peace and Order, yesterday suggested the government bring the case to the Constitutional Court to rule on whether the February 2 election could be delayed. He said he believed the Constitution does not empower the government to postpone an election.

In a related development, the EC is setting up a temporary office in Chon Buri in preparation for the next election, according to a source in the agency.

The move came after protesters gathered outside the Government Complex on Chaeng Wattana Road, which houses the EC head office.

The Election Commission designated 92 Thai missions in 67 countries to hold the election outside the Kingdom as 143,800 eligible voters registered to cast their ballot, he said. More than one million Thai citizens live abroad, according to Sek.


Thaksin urges Yingluck to stay as Prayuth demurs
The Nation / Phuket Gazette
PHUKET: Caretaker PM Yingluck Shinawatra almost gave in to resignation demands by the anti-government protesters on Sunday – but changed her mind at the last minute as her brother, former premier Thaksin Shinawatra, called to ask her to stay on and push for the February 2 election, sources said.

In a phone conversation with Army chief Prayuth Chan-ocha a day before the protesters’ Bangkok shutdown began, Yingluck told the commander she was tired of the political tension and asked for his recommendation.

Prayuth declined to offer suggestions and said it was her call to make any decision. If anything untoward happened, it would be the prime minister’s responsibility, he said.

Yingluck told Prayuth she would give an answer by 4pm Sunday. Many expected she would announce her resignation, the source said.

Yingluck later called a meeting with Pheu Thai Party executives and talked via Skype with Thaksin, who said the Constitution did not allow her to resign, according to the sources.

If she did resign, the protesters would ask the court to rule that she had violated the Penal Code’s Article 157, which punishes officials who abandon their duty. She would face a jail term, he warned.

To protect themselves from being attacked by unknown parties, soldiers should dress in plain clothes while guarding the many buildings of government agencies and their command posts, according to a source.

The military has deployed troops to act as security guards to many government agency buildings such as the Prime Minister’s Office and the Government Complex, as well as protest sites.


Bangkok roads clear as protests hold
The Nation / Phuket Gazette
PHUKET: Traffic was light in Bangkok yesterday, as residents avoided travelling or stayed home following the kick-off of the anti-government Bangkok Shutdown campaign, while most commuters turned to rail and other public transport.

A large number of commuters turned to marine transport in canals and on the Chao Phraya River.

More than 4,000 non-traffic and military policemen have been assigned to traffic-direction duty in addition to those on regular duties at Bangkok police stations. Police said contingency traffic plans could be adapted on an hourly basis depending on the situations, adding that the busiest of all seven protest stages was the one at the five-way Lat Phrao Intersection.

Police also advised motorists to avoid Rama VIII Bridge, which had been blocked by protesters, by using elevated roads and heading to the Pin Klao or Krung Thon bridges.

Caretaker Transport Minister Chadchart Sittipunt, writing on his Facebook page, denied allegations he halted Bangkok-bound trains transporting anti-government supporters from the South. He said there were other means of transport for them and