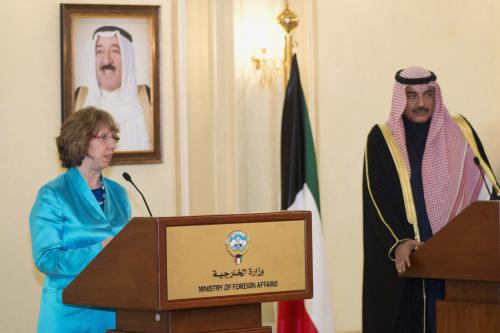 If successful, the next round of negotiations could head off the risk of lingering mistrust spiralling out of control into a wider Middle East war over the Islamic republic’s nuclear programme.

Led by European Union foreign policy chief Catherine Ashton, the talks will face the challenge of defining a permissible scope of Iranian nuclear activity that would lay to rest Western concerns that it could yield an atomic weapon.

In return, Iran – which denies having any intention to “weaponise” the enrichment of uranium for nuclear energy – wants governments in the United States and Europe to end painful economic sanctions.

The source said the first meeting in the new phase of diplomacy between Iran and six powers – the United States, Russia, China, France, Britain and Germany – would include Ashton and Iranian Foreign Minister Mohammad Javad Zarif.

“It won’t happen in January, because of the Chinese New Year, but it is very, very, very likely in February,” the diplomat said, speaking on condition of anonymity.

Senior diplomats from the seven countries and the EU will discuss an agenda ahead of the meeting. Ashton herself announced plans on Monday to go to Tehran in the coming weeks in preparation for more talks.

U.S. President Barack Obama said on the weekend he had “no illusions” about how hard it would be to secure a comprehensive agreement with Iran.

His administration voiced concern on Monday about recent reports that Iran and Russia are negotiating an oil-for-goods swap worth $1.5 billion a month, a deal the White House said could potentially trigger U.S. sanctions.

Russian and Iranian sources close to the barter negotiations have said final details are being discussed for a deal under which Russia would buy up to 500,000 barrels a day of Iranian oil in exchange for Russian equipment and goods.

“If the reports are true, such a deal would raise serious concerns as it would be inconsistent with the terms of the P5+1 agreement with Iran and could potentially trigger U.S. sanctions,” Hayden said.

Reached on November 24, the interim six-month agreement freezes Iran’s most sensitive atom work – higher-level enrichment – in return for an estimated $7 billion in relief from sanctions.

Iran and the six powers said at the weekend the deal would go into effect on January 20, pending verification by the International Atomic Energy Agency that Tehran is meeting its end of the bargain.

The preliminary accord appeared to arrest a drift towards regional war during which the United States and Israel have both refused to rule out military action against Iranian nuclear sites if the matter cannot be resolved diplomatically.

Underscoring the challenge of the new talks, Zarif said on Monday the interim agreement was “the beginning of a long and difficult road”.

“There is a very serious confidence deficit vis-a-vis the West in Iran. Our people believe that our peaceful nuclear programme has been dealt with in a totally unfounded way,” Zarif told a news conference during a visit to Lebanon.

Later in the week, he is due to meet Russian President Vladimir Putin in Moscow, Russian officials said on Monday.

Russia’s Foreign Ministry issued a statement welcoming the weekend decision to launch the interim accord on January 20.

“We hope that a successful implementation of the primary phase will create the necessary conditions for working out agreements going further that will result in a final and comprehensive settlement in regard to Iran’s nuclear programme,” the ministry said.

In Washington, Obama urged Congress to resist the temptation to approve new economic sanctions against Iran, saying, “Now is the time for us to allow the diplomats and technical experts to do their work.”

Raising the issue in comments to reporters, Obama said that if Tehran abides by the agreement, “then I have no doubt that it can open up extraordinary opportunities for Iran and their people.”

But if they refuse, he said, then “we are in position to reverse any interim agreement and put in place additional pressure to make sure that Iran does not obtain a nuclear weapon.”

French Foreign Minister Laurent Fabius said an exact date for the resumption of the next talks had yet to be set.