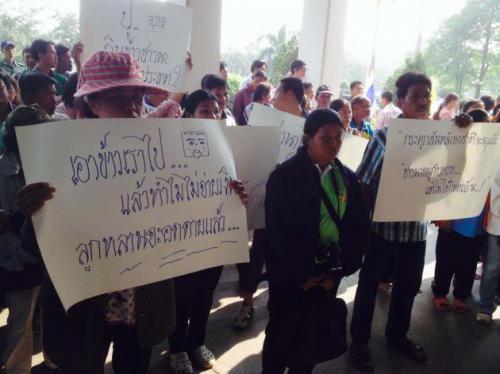 With their days-long blockade of roads in Ratchaburi having little impact, rice farmers in the western province were initially looking to the Bank for Agriculture and Agricultural Co-operatives (BAAC) for help. But the group later announced they would close all main roads across the country to force the caretaker government to resolve their crisis.

The farmers are in financial trouble after the government repeatedly delayed payments in recent weeks for rice submitted to the pledging scheme. The

farmers are supposed to receive payments soon, in fact, after presenting certificates from the scheme to the BAAC. But without funds coming from the government, the BAAC has said it is unable to pay them.

Rawee Rungruang, who led many farmers blocking the Rama II Road yesterday, said: “Now, please count our certificates from the scheme as equivalent to land title deeds so that we can get loans to cover our daily expenses and invest in farming materials for the next crop season.”

He suggested that the BAAC should then collect repayment, including interest, from the government later on.

Ministries to be targeted

Rawee said late yesterday that farmers from all four regions had agreed to block all main roads tomorrow so no car could pass. They would also send members to join the farmers’ protest in Bangkok and possibly close the Ministry of Commerce and the Ministry of Finance to demand the rice money they are owed.

Rawee’s group has closed Rama II Road around the Wang Manao intersection in Ratchaburi’s Pak Tho district since February 1.

The rice-pledging scheme was introduced as one of Pheu Thai Party’s populist policies several years ago.

But instead of benefiting farmers, it has left 1.4 million rice-growing families in dire trouble because it has lapsed in a financial mess – with the government unable to sell rice bought at well over market prices, or secure billions more needed to pay for the latest crop.

Upset with the government, a number of farmers in Central provinces are preparing to travel to Bangkok and demand payment in front of the Commerce Ministry tomorrow (Feb6).

“If the government doesn’t give us a satisfactory answer, we will block roads,” Songphon Poonsawas, a leader of farmers in Angthong, said.

Northern Farmers Network chairman Kittisak Rattanawaraha said many farmers in the North wanted to head to the capital to pressure the government but did not have money to pay for the trip.

In Buri Ram, farmers are also struggling to find odd jobs, as they need to cover living expenses till the government can pay for rice it has bought under the scheme.


Democrats ask to have Pheu Thai dissolved
The Nation / Phuket Gazette
PHUKET: The Democrat Party yesterday lodged a complaint with the Constitutional Court against Pheu Thai Party, calling for dissolution of the ruling party for pushing the February 2 election to be held despite an Election Commission recommendation to delay the poll.

It has requested dissolution of the Pheu Thai Party because executive authority was utilised, via government acts such as the declaring of a state of emergency, which afforded it control of political expression over others in the run-up to the poll.

Article 68 of the Constitution stipulates one’s right to protect the Constitution. It also prohibits any act that would seek change or to obtain authority through unconstitutional means. The article also permits dissolution of political parties found to have done this, and can ban party executives from participation in political activities for five years.

However, Pheu Thai party-list MP Ruangkrai Leekitwattana said duty and decisions in regard to arranging or postponing elections did not belong to a government, and that neither Yingluck nor the caretaker government utilised executive authority to gain advantage over other parties.

The Democrat Party would also seek to impeach Yingluck and all members of her Cabinet for their “misconduct” and roles in arranging the February 2 poll, Chavanond said. This would be done through the National Anti-Corruption Commission, via a signature campaign seeking support from a minimum of 20,000 people.

He dismissed a Pheu Thai statement that the Democrats had no right to void the February 2 election results because it failed to field candidates.

Meanwhile, EC chairman Supachai Somcharoen said a new election would be arranged if rulings by the Constitutional Court or the Ombudsman’s Office found that results of the February 2 poll were invalid. And a new royal decree may need to be issued by the caretaker government to fix problems in 28 constituencies in the South, as no candidates had registered for these seats.

Pheu Thai spokesman Prompong Nopparit said a complaint will be loged today with the EC to seek the dissolution of the Democrat Party, for former MPs’ roles assisting in protest rallies, in violation of Article 68.

The NACC revealed details of asset disclosures by 491 ex-members of Parliament whose terms finished with the dissolution of the House of Representatives in December.

The declared assets were in combination with those owned by the spouses.

– Caretaker Prime Minister Yingluck Shinawatra had Bt603 million in assets and Bt28 million in liabilities. Her assets increased since taking office by more than Bt50 million.