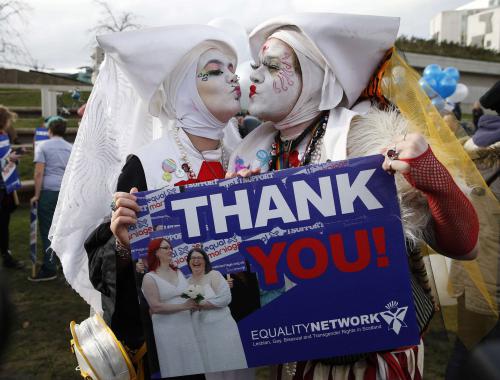 The Scottish government, which will hold a referendum on independence from Britain in September, said passing the same-sex marriage bill was an important step for equal rights and paved the way for same-sex wedding ceremonies later this year.

The move was opposed by the Scottish Catholic Church and the Presbyterian Church of Scotland but the law will not compel religious institutions to hold ceremonies on their premises.

The approval, in a vote of 105 to 18 in Scotland’s devolved parliament, follows similar legislation passed by the British parliament last year that allows same-sex marriage in England and Wales, with the first weddings to take place from March 29.

Scotland Health Secretary Alex Neil said it was “right that same sex couples should be able to freely express their love and commitment to each other through getting married”.

“Marriage is about love, and that has always been at the heart of this issue,” Neil said in a statement.

Gay campaigners said the vote was a milestone for lesbian, gay, bisexual and transgender equality in Scotland and welcomed the Scottish government’s efforts to advance the approval from an expected time frame of 2015. Currently in Scotland, same-sex couples can enter into civil partnerships.

“This is a profoundly emotional moment for many people who grew up in a country where being gay was still a criminal offence until 1980,” Tom French, policy coordinator for the Equality Network, said in a statement.

The legislation to allow same-sex marriage first entered the Scottish parliament for debate in June last year despite opposition from church and other religious groups.

Under the law, civil marriage ceremonies can take place in any place agreed between the couple and the registrar, other than religious premises.

Opposing the move, the Church of Scotland said same-sex marriage fundamentally changed marriage as a relationship between one man and one woman.

The Evangelical Alliance Scotland described the move as “legal fiction” and a “blow to society” at a time when Scotland is about to vote in September on whether to split from the rest of Britain and become an independent country.

“At a time in Scotland when we are considering what kind of nation we want to live in, this legislation sends all the wrong signals about the place of marriage and family in modern day Scotland,” spokesman Fred Drummond told Christian Today website.

The fourth British link, Northern Ireland, has stated it does not intend to introduce same-sex marriage legislation.

Scotland is among a growing number of countries as well as parts of the United States and Mexico that allow same-sex marriage. The Netherlands was the first in 2001, and last year England and Wales, Brazil, Uruguay, New Zealand and France joined the list.