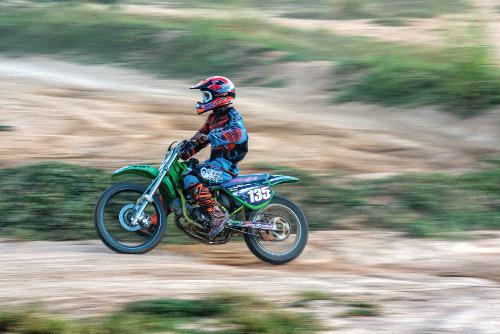 PHUKET: Driving a car or riding a motorcycle around Phuket, one will quickly come to grips with the “rules of the road”. It can often make you wonder if you made a wrong turn and ended up on a racetrack. However, if you do indeed feel the need for speed there is a place where you can let loose and driving like a maniac is encouraged. But you are going to have to get dirty.

On Soi Suksan 1, which connects Wiset Road to Patak Road just south of Chalong circle, is what remains of a motocross track. “Loong” Chaiyawat, who has been racing motocross since he was just a kid, recalls that it was once an official track hosting races on a Southern Thailand circuit. With an apparent lack of sponsorship, it went defunct sometime around 2006.

What is certain is that if you happen by this dusty patch of hillside on a Sunday between 5 and 6pm, you see motorcycles flying through the air. Every week a group of motocross enthusiasts fill up their tanks, gear up and rip around the track. There are no time-clocks or checkered flags, just a bunch of guys getting together for some friendly races.

You can see a variety of bikes being used but Mr Chaiyawat says that most people use modified 110cc Honda Waves. At first glance, the machines appear to be purebred motocross bikes sporting high clearance suspension, performance exhaust and aggressive off-road tyres. Upon closer inspection, it’s revealed that they truly are the ubiquitous Hondas at heart.

It is obvious that some of the racers have invested time and money in their machines and blood, sweat and maybe a tear or two in learning the sport. Certainly some of the racers are gear-heads who are partial to turning their own wrenches, but if you don’t have the knowledge or resources, never fear. Mr Chaiyawat tells of a shop that is popular among off-roaders for modifying bikes called Gang Service and can be found in Karon – on Patak road near the Phad Thai Shop. Look for the green and white “Bike Point” sign.

The scene is very open and friendly and anyone is invited to join in or find a seat outside of the dust cloud to watch the action. It is a good opportunity for beginners to practice maneuvering corners and get comfortable on the jumps, since it is usually not too crowded and there are breaks where the track is empty.

For those looking for an adrenaline rush on two wheels, yet don’t want to get thrown under a bus, go check out the old motocross track. Maybe you will make some new thrill-seeking friends and you just might get the urge to test your mettle.