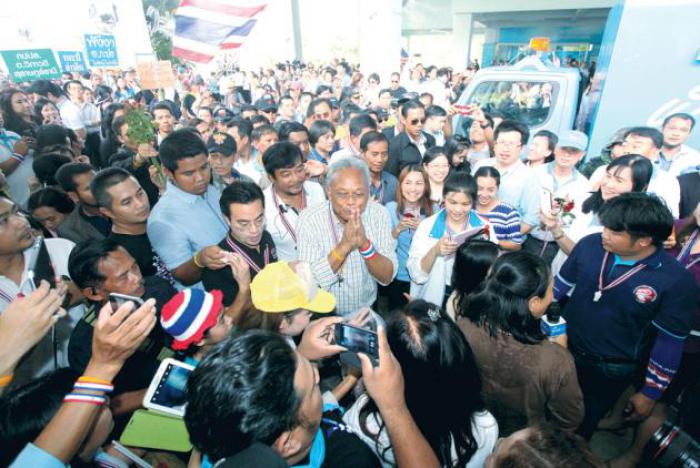 PHUKET: The United Front for Democracy against Dictatorship (UDD) will hold a mass rally of red shirts one day before the Constitutional Court delivers its verdict on whether Yingluck Shinawatra has lost her status as caretaker PM.

The court decision will determine Yingluck’s role in the transfer of Thawil Pliensri, the former National Security Council (NSC) chief.

Red-shirt leader Tida Thawornseth said the date of the rally would be called when the Constitutional Court announces “judgement day”.

The rally would be peaceful and weapons-free, she said.

The former UDD chair said she believed the Constitutional Court, the National Anti-Corruption Commis-sion and the Election Commission had already made their decisions in the cases against Yingluck.

She accused the agencies of holding double-standards, which she said was a potential cause of political chaos. If the prime minister was found guilty, the UDD would rise in a struggle which would be heightened to achieve victory, she added.

Tida also asked why the EC and the Constitutional Court had not taken legal action against People’s Democratic Reform Committee (PDRC) secretary-general Suthep Thaugsuban for having admitted in his speech he had successfully engineered the nullification of the February 2 election.

Suthep also declared he would obstruct an election in every way, indicating that he and the PDRC had impeded democracy, she said.

She called for the EC to hold a clean and fair election and not use delaying tactics in the hope of bringing about chaos.

An election was the only way out for the country, Tida added.

Meanwhile Protesters of the PDRC marched yesterday along a designated route in the capital to invite Bangkok people to join their campaign for the ousting of the so-called Thaksin regime and for reforms.

They moved from the statue of King Rama 6 in front of Lumpini Park at 10.20am. They then marched along Narathiwat Ratchanakarin, Sathorn, Suan Phlu, Nang Linchi, Chan and Charoen Krung roads to Asiatique, the riverfront shopping complex.

PDRC guards were deployed at points along the route to provide security.

PHUKET: The Election Commission (EC) has set a date for a new poll in late July and guaranteed that the ballot would go smoothly, despite doubt on whether another ballot can be staged soon if rival parties fail to reach a compromise.

The EC had put measures in place to ensure that candidates to be MPs can register in every seat in a new poll, commissioner Somchai Srisutthiyakorn said yesterday.

The Constitutional Court ruled that the February 2 election was invalid because the election could not be held on the same day across the country. This occurred after anti-government protesters blocked candidate registration in many constituencies in the south.

The caretaker government led by Yingluck Shinawatra wanted to push ahead with a snap election while protesters led by veteran politician Suthep Thausuban wanted her to step down while a non-elected government undertakes reforms.

Suthep is mobilising supporters for rallies late this month, when he expects the Constitutional Court will disqualify Yingluck from office over an illegal transfer of a senior official, thus causing a ‘political vacuum’ that would open the way to an independent administration to undertake reforms.

But the pro-government United Front for Democracy against Dictatorship (UDD or red shirts) has said it will stage a mass rally the day before the Constitutional Court delivers its verdict on whether Yingluck will be told to stand down as prime minister over the transfer of Thawil Pliensri, the former National Security Council (NSC) chief.

Despite that, Somchai said the EC was equipped with legal measures to prevent a repeat of the problems that rendered the February 2 poll unconstitutional.

However, he has urged the government and anti-government People’s Democratic Reform Committee (PDRC) to hold talks to resolve differences so a new poll does not face a repeat of protests and disruption by rival camps.

Somchai said the EC would next meet with the government on April 30 to discuss issuing a Royal decree for a new election and submitting it for Royal endorsement, a process that may take about 20 days. If this goes according to plan, the new election could be held on July 20, which was the earliest date possible, he said.

Election Commission chairman Supachai Somcharoen expressed confidence that there would be a way out to the differences between Pheu Thai Party, which wants the poll to be held on June 15, and the anti-government group, which wants national reforms implemented before a new election is held.

Supachai did not think that rival camps would plunge the country into civil strife.

Democrat Party deputy leader Ongard Klampaiboon said the threat of anti-government protests was a bad sign for the new election.

He suggested that the EC talk to PDRC chief Suthep into halting their plan to oppose a new election.

“If the EC fails to get all sectors to accept the new election, it is likely the new poll may be nullified again regardless of whether the Democrats take part or not,’ he said.

Pheu Thai spokesman Prompong Nopparit said the EC must tell the public why it wants to postpone the election till July if most parties want it held in June.

Prompong called on Somchai to review his role and step down for failing to carry out his duties as Election Commissioner in a neutral manner.

PHUKET: Some farmers have dropped suits against the government for failing to pay them under the controversial rice-pledging scheme, Law Society of Thailand vice-president Sunthorn Payak has said.

The LST has been providing legal assistance to farmers, who have also received financial support from the anti-government People’s Democratic Reform Committee.

The Society had filed more than 20,000 suits in provinces across the country against the government over the scheme, Sunthorn said.

He said provincial politicians had managed to talk some farmers into withdrawing their lawsuits after telling them they risked not getting any money if they file a suit.

He said politicians had tried to undo the damage done to relevant ministers and the government by the scheme.

Disgruntled farmers have rallied in the capital, while some have committed suicide due to financial stress.