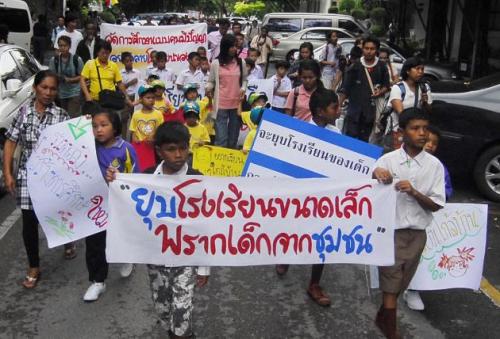 
School mergers unpopular with parents: Poll
The Nation / Phuket Gazette
PHUKET: More than half the parents surveyed by a Dusit Poll opposed the Education Ministry’s plan to merge 17,000 small schools across the country in order to increase efficiency and save costs.

Of the total, 60 per cent of parents said students, teachers and parents would be adversely affected by the plan. For example, some students would be travelling further to schools, and others might have problems adjusting to new students, new schools and ties to their communities.

Asked about what worried them most in the coming school semester, 38 per cent of parents said higher expenses for tuition fees, school uniforms, and equipment; and 24 per cent said they were concerned about their children’s safety in travelling to school; 21 per cent were worried about their children adjusting to new classes.

Asked what they wanted to tell the Education Ministry: 41 per cent said they wanted improved Thai education, 39 per cent wanted good curriculums and teaching with high standards, 10 per cent said providing equal educational opportunity for students.

He said that the subcommittee would also discuss the Commerce Ministry’s plans to pay back the Bt500 billion loan it borrowed from BAAC to run the pledging scheme. Most of those funds had now been spent on the scheme, he noted.

Luck said that if the government failed to meet the target for releasing rice from the stockpile – money that it needed to pay back BAAC – it might have to look at other ways to increase funds for the rice pledging project.

The government allocated Bt500 billion for the project, of which Bt410 billion was a loan from the BAAC, while the rest was lent to the government from the bank’s own coffers. The ministry had already paid Bt110 billion of the total Bt220 billion to be repaid this year.

Luck said that in effect, the government had to release stockpiled rice so it could make enough money to repay the fund. This would, in turn, enable the BAAC to continue the pledging scheme for the next crop season. Of the total Bt110 billion returned to the bank, Bt85 billion is for BAAC’s main crop pledge last year and the rest for the main crop of 2011.

Over the past few months, the BAAC has used Bt21.5 billion of the amount returned, to pledge a second crop for 2012/2103, totalling 1.34 million tonnes of rice from 17,000 rice farmers. The bank expects that seven million tonnes from the second rice crop will be included in the scheme. The pledging process for the second crop will end on September 15. Currently the fund could afford the pledge for the second crop, Luck said.
He said the subcommittee would also discuss whether the strong baht and the decline in the price of rice on the global market would affect the government’s decision to release rice from the stockpile.


House dissolution an option : Phumtham
The Nation / Phuket Gazette
PHUKET: Pheu Thai Party secretary-general Phumtham Wechayachai believes the Constitutional Court is responsible for creating the crisis between the judiciary and legislative branches and says dissolution of the House may be the best solution in the current stand-off.

He said the crisis had broken out after 312 MPs – mostly Pheu Thai lawmakers and appointed senators – announced they would not accept the authority of the Constitutional Court over a judicial review to assess the constitutionality of a bill to amend Article 68.

In his interview to The Nation, Phumtham said that the crisis originated from the court’s own one-sided interpretation of the charter.

Phumtham said Pheu Thai had already tried its best to avoid confronting the judiciary by not pushing ahead to pass the Article 291-amendment bill in the third reading after the Constitutional Court ruled that the entire charter rewrite could not be done without first holding a public referendum. The 291-amendment bill sought to set up a charter-drafting assembly to rewrite the entire charter.

Since the judiciary and legislative branch interpret the charter differently, Pheu Thai might have to seek a second opinion from the public and other organisations, Phumthai said.

“There is no such thing as an instant formula in politics. We need to find the best way out of the crisis without hindering a possible solution just because we fear the outcome. We may have to hold public debates with experts or perhaps hold a public referendum. We may even have to dissolve the House,” Phumtham said.

He added that it was not the government’s intention to dissolve the House. “However, if there is no way out of the crisis and the only option left is House dissolution, then we must do it,” he added.

He said it was not always certain that the government would win a snap election after dissolution of the House, but it would define more clearly where the support of the people lay on the issue.

It was normal in a democracy for the majority to have the last say when facing this kind of deadlock, said added.

“If our House seats were to dwindle after an election, we would review our position, but at the same time, we could get overwhelming backing from the people, then the Constitutional Court would have to review its stand,” Phumtham said.

He denied that former prime minister Thaksin Shinawatra made a Skype video call to a meeting of Pheu Thai MPs to ask them to get ready for a House dissolution.

Thaksin simply asked Pheu Thai MPs to regularly visit their constituents during the break of Parliament, he said.

The Pheu Thai secretary-general said impeachment of Constitutional Court judges might be an option for ending the crisis of conflict between the two branches of power, but Pheu Thai had not yet considered the proposal.

Although the plan to amend the charter had resulted in the stand-off, Phumtham insists that the amendments must be carried out because it was one of Pheu Thai’s party promises during its election campaign.— Phuket Gazette Editors