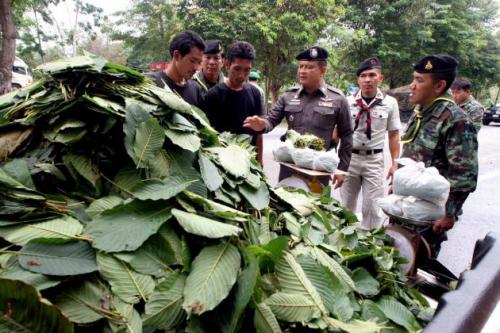 Kratom not legal yet, but closer
The Nation / Phuket Gazette

PHUKET: Public Health Minister Pradit Sintavanarong confirmed yesterday that the narcotics control committee under the Food and Drug Administration (FDA) has still not reached a decision on whether to remove “kratom” (Mitragyna speciosa) from the prohibited narcotics list.

It could take another two months for the sub-panel, assigned to gather information on the tropical evergreen, to reach its conclusions, he said.

Used for various medicinal purposes, the leaves of the kratom tree are psychoactive when chewed, producing an uplifting mood.

Pradit said the Justice Ministry had consulted the Public Health Ministry on whether kratom could be removed from the illicit drugs list on the grounds that it could be used as a medicine in aiding the recovery of yaba addicts, as well as acting as a substitute for yaba – thus reducing the number of yaba addicts.

Legalisation of kratom would also reduce the number of people being detained for kratom possession, as well as being wrongly charged with possession. The sub-panel, said Pradit, would have to study these factors before a decision could be made.

He said the ministry, in its role as an academic body, would focus on the medical properties of kratom in relation to health, rather than issues surrounding its legal use. However, Pradit stated there were similar substances with the same medical properties as kratom, thus there was no real need to use it.

If all could agree that kratom should not be classed as an illegal drug, they would inform the committee.

Boonchai said there had already been two attempts to de-list kratom, one in 2004 and the other in 2009, but the committee had refused to change kratom’s status as an illegal drug. It would be a good time to review those cases, he said, because there had been many changes and developments since the last case.

Considerations this time would be based on the Justice Ministry’s reasoning, and on internationally accepted protocol.

PHUKET: At least 51 flood victims in Prachin Buri have ended up in hospital after consuming food handed over as aid yesterday.

Of them, five were in a bad state and still being treated at hospital as of press time.

“The victims either began vomiting or got diarrhea after eating the food that was handed out to them at a flood-relief centre in tambon Ban Hoi,” Prachin Buri public-health chief Dr Nopporn Pongpleumpitichai said.

The flood-relief centre in Prachantakham district’s tambon Ban Hoi was set up after strong currents of water broke down an earthen ridge in nearby Kabin Buri district and inundated the area.

Chachoengsao Governor Anukul Tangkananukulchai said the water current from Prachin Buri was so strong that many areas in his province were also flooded. Floods in Chachoengsao’s Phanom Sarakham district are already a metre high.

Since September 17, floods have ravaged more than 2.16 million rai of farmland and upset the lives of more than 2.87 million people. Over the same period, the flood-related death toll has risen to 27.

Prime Minister Yingluck Shinawatra has instructed provincial governors to survey affected properties and farmland, and to deliver assistance to victims. She is also insisting that all infrastructure damage be fixed immediately after the floods subside.

Bangkok Governor Sukhumbhand Paribatra, meanwhile, assured residents that city officials were prepared to deal with floods, reckoning that some parts of the capital might end up getting flooded in the event of non-stop downpours.

“Slow down for safety when you drive on flooded roads,” he advised.

Meanwhile, the Pasak Jolasid Dam in Lop Buri, which just 150 kilometres from Bangkok, is close to brimming over. It is currently about 96 per cent full and the Royal Irrigation Department has started releasing about 600 cubic metres of water per second from the dam.

People living along the Pasak River in Saraburi and Ayutthaya have been warned to closely monitor its water levels.

“The water will rise,” the department warned.

PHUKET: Natural Resources and Environment Minister Vichet Kasem-thongsri has expressed confidence he will not be removed from his position over claims that his wife forgot to declare company shareholdings, but ruling party sources have said he is among the ministers in danger of losing their jobs in an imminent reshuffle.

Pheu Thai Party sources said many party MPs have been to see the party’s de facto leader, former PM Thaksin Shinawatra, in Hong Kong and Macau. They claim he told the MPs and prospective candidates to visit local voters and prepare for an early election. He also reportedly said there would be a Cabinet reshuffle this month to open opportunities for fresh applicants.

The National Anti-Corruption Commission (NACC) previously reported that Vichet’s wife, as well as Sorawong and his wife, had failed to declare stockholdings of more than 5 per cent in private firms when declaring their assets.

According to the law, ministers and their spouses are required to declare all their assets, otherwise the minister could be disqualified.

Vichet insisted that he complied with the legal requirement to report all of his assets to the NACC.

Since the NACC does not have the authority to rule over Vichet’s qualifications as a minister, it has forwarded the case to the Election Commission for interpretation. After that his qualifications will be judged by the Constitutional Court.

“On the legal procedures, it would be better to consult Deputy Prime Minister Phongthep Thepkanjana, who has responsibility for overseeing the government’s legal affairs,” Vichet said.

“To date, there has been no sign from the Pheu Thai party as to whether I will be removed. However, I have been constantly thinking about the day I will leave this ministerial position, from the first day I worked at the ministry,” he said.

Vichet has held the position of natural resources and environment minister since July. He has vowed to launch a renewed battle against those who encroach on forest reserves and has also ordered senior officials to review forest-protection laws.

The minister, who formerly chaired PTT’s board of directors, has also instructed his officials to monitor forested areas using satellite imagery every three mo