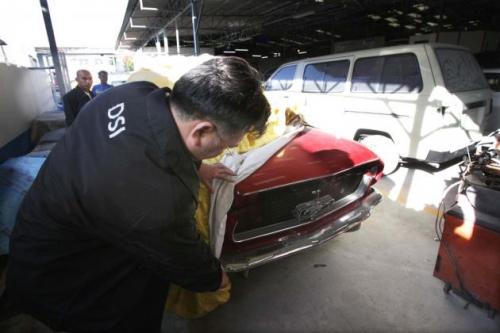 PHUKET: The Department of Special Investigation yesterday impounded 20 luxury cars on suspicion their owners had not paid proper import taxes.

The high-end cars were seized pending tax clarification by the owners after DSI officials inspected seven premises suspected of being involved in the allegedly massive tax evasion scam.

The DSI has stepped up checking alleged tax evasion by luxury car owners after four high-end cars were damaged in a fire on May 29 and two other cars on the same trailer were left unclaimed.

Following the inspections yesterday, 12 luxury cars were impounded in Nakhon Pathom, four in Pathum Thani and four others in Prachin Buri.

Seven inspection teams were dispatched by Pol Lt General Kornwat Parnprapakorn, commander of the special operation division of the DSI.

As part of the inspection yesterday, Pol Lt Col Wichit Chartkitcharoen led a team of DSI officers to check Auto Art Services on Soi Lat Phrao-Wanghin 85. The check was carried out after the DSI allegedly learned from the Land Transport Department that the place claimed to be an assembly plant for luxury cars.

The DSI investigators allegedly found that Auto Art Services was registered as being owned by Pornthep Sukhahut and Pornthep lent the garage to Phanwasin Wilaikaew since August 2011.

The Land Transport Department informed the DSI that Phanwasin had registered 76 luxury cars from 2011 to 2012, claiming they were assembled at the Auto Art Services garage.

The DSI official found that the garage was being used now as a garage to fix car trunks and engines damaged in accidents.

Wichit alleged the checking found the garage did not have any equipment for assembling luxury cars at all.

The tent is owned by Naron Lekmee, 51, who fully cooperated with the officers. He provided documents to show the vehicles had been legally imported and import taxes had been paid.

PHUKET: Anti-Thaksin businessman Ekkayuth Anchanbutr has been missing since Friday night and his lawyer and relatives suspect he may have been abducted.

Suwat Apaipak, Ekkayuth’s lawyer, told reporters yesterday the businessman, who has openly opposed the Pheu Thai government, was last seen at a restaurant in the Saphan Kwai area on Thursday night and was heard over the phone for the last time on Friday.

Suwat said Ekkayuth had dinner with a few friends at the Kratae Kitchen restaurant at 10.30pm on Thursday and may have been abducted at 11pm that night.

Suwat said Ekkayuth did not show up for an appointment to play golf with friends on Friday and when one of the friends called him, he answered and said he was busy with a senior person and had to cancel the golf session.

Ekkayuth’s sister, Arunee Sunthornpat, 51, filed a complaint with the Crime Suppression Division at 1pm yesterday, saying her brother could not be reached by phone since 8pm on Friday.

Arunee told police that Ekkayuth called his sister, Supaporn Waenlor, at 9am on Friday, telling her to give a cheque book to a driver of the company. The driver was told to meet Ekkayuth at Gate 8 of Suvarnabhumi Airport.

But when the company driver went to the airport, he did not see the businessman, only Ekkayuth’s personal driver, identified as Santiparp Phetduang. He saw Ekkayuth’s van parked near Gate 7.

Santiparp took the chequebook and told the company driver to wait for 45 minutes.

He returned with three cheques for Bt5 million signed by Ekkayuth and the company driver was told to cash the cheques at Siam Commercial Bank’s Town in Town branch.

Initially, the bank would not allow the cheques to be cashed because Ekkayuth had signed the wrong date – but bank officials called him and eventually allowed the driver to take out Bt5 million in cash.

The driver returned to the airport but Ekkayuth was still not there. Santiparp turned up to take the money and left the scene in the van, Arunee told police. The personal driver is also not traceable.

Suwat said Ekkayuth’s abductors also went to the businessman’s house to steal a computer connected to his security camera system. “They may be a big gang because they went to his house to eliminate the evidence,” Suwat said.

He said relatives found Ekkayuth’s house door open at 8pm on Friday and the computer’s hard disk, which recorded feeds from security cameras, was missing.

Khamronwit said he had instructed police to speed up the investigation.

“I have instructed the investigators to check it. Officials concerned will hold a meeting at 10.30am tomorrow [Monday] to check the facts,” Khamronwit said.

Parnthep Pongpuapan, the spokesman of the People’s Alliance for Democracy, said he had not yet been informed of Ekkayuth’s disappearance.

Ekkayuth has lately attacked former prime minister Thaksin Shinawatra on his Thai Insider website and Facebook fan page. He made headlines last year when he alleged on his website that Prime Minister Yingluck Shinawatra skipped a House meeting to meet businessmen at the Four Seasons Hotel.

After his disappearance was reported on TV and social media, several of Ekkayuth’s supporters went to his Facebook fan page to post messages showing their concern for him.

Several high-profile people have gone missing, including Muslim lawyer Somchai Neelapajit in 2004, who has been pronounced legally dead.