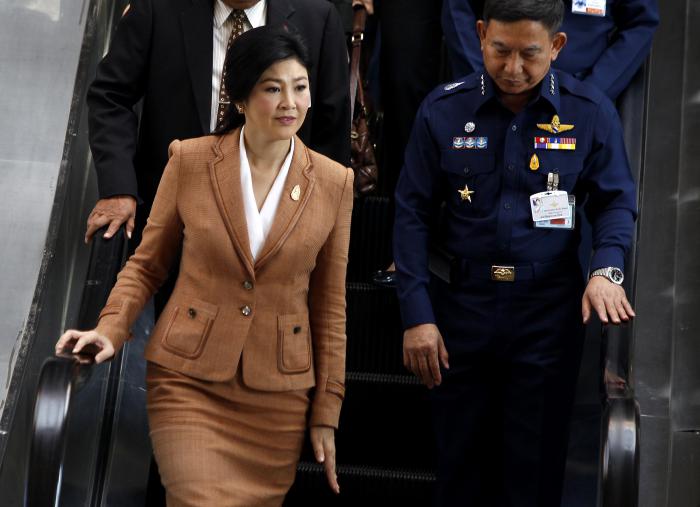 PHUKET: The military will maintain its force and 176 street bunkers across Bangkok, even though the government has lifted the emergency decree.
A military source said the reason the government scrapped the state of emergency was not only because the Civil Court had put restrictions on its clamping down on anti-government protesters, rendering the emergency decree meaningless. Another reason was that “Thaksin supporters” wanted to gauge the military’s power over maintaining its 176 bunkers on Bangkok’s streets.

After lifting the state of emergency, the government has been pressuring the military to remove the bunkers, citing adverse effects on business and foreign investors’ confidence.

Government strategists want to close in on the People’s Democratic Reform Committee protesters in April by choosing to be on the offensive and not defensive. As a result they have replaced Thida Thavonseth with Jatuporn Promphan as chairman of the United Front for Democracy against Dictatorship (UDD). They are also recruiting a new PM should caretaker Prime Minister and Defence Minister Yingluck Shinawatra be suspended from duty if independent agencies file indictments against her.

The government sees the military bunkers as “obstacles” to reducing the number of PDRC protesters who have staged a sit-in anti-government protest already five months long.

“The government is doing everything it can to hold on to power. It lifted the state of emergency only to test the military’s strength, especially that of Army chief General Prayuth Chan-ocha. The government’s supporters are not very happy with the presence of bunkers in the capital,” the source said.

The military will not remove the bunkers just yet because the situation is still at a turning point and assailants continue to launch their attacks almost on a daily basis. The violence takes place even with a heavy military presence. “If we withdraw our force, how is the government going to deal with the violence? The military is concerned about the safety of independent agencies and courts, which have faced daily intimidation,” the source said.

Deputy Army spokesman Col Winthai Suvari said soldiers are still currently stationed at the checkpoints as it was the duty of the military and soldiers to ensure safety for the people.

Moreover, any change to those measures would be considered according to the situation.

So far, the military bunkers have been adapted to harmonise with the locations. Some had been moved for the same reason, he said.

Deputy police spokesman Col Wichayakorn Nichaboworn said police officers had been told to adapt their strategies and operational plans to suit the situation. They were also ordered to carefully follow up and expedite related cases of law violation.

Moreover, police officers had been told to closely keep an eye on the movement of groups of people in the provinces, to prevent situation instigation. At the same time, investigators were deployed to get information from the security guards for each group of protesters, she said.

PHUKET: A drug bust in Chiang Mai on March 17 that saw police seize 400,000 ‘ya bah’ pills exposed a new formula of ya bah mixed with heroin, Office of the Narcotics Control Board (ONCB) secretary-general Pol Gen Pongsapat Pongcharoen said yesterday. The drug carried a logo of a lion on a globe.

The narcotic – the first of its kind discovered by the ONCB in 37 years – was suspected to be a new product of a Lahu tribal factory on the Myanmar side, in order to make the ya bah more addictive, he said.

If an addict took one ya bah pill, worth Bt120, per day, this new product would make the addict want to take 2-3 pills per day, he said – boosting the dealer’s income accordingly.

Warning that heroin in Thailand and neighbouring countries contained pure heroin of 80-90 per cent – compared to other countries’ rate of only 20-30 per cent, Pongsapat said this drug batch could be fatal.

ONCB would contact Laos and Myanmar to help locate and crackdown on the factory, he said. Although police had intercepted this batch of drugs from smugglers, some of it might have spread already to communities. Pongsapat said anyone spotting narcotics with a logo of a lion on a globe should alert the ONCB hotline 1386.

PHUKET: The Constitutional Court will, tomorrow, make a much-awaited ruling on the validity of the February 2 election, a judgement that could end the ongoing political stalemate or further fuel conflict.

The court set the schedule after hearing accounts of all parties concerned in the dispute. The petition asking the court to rule on the validity of the poll was forwarded by the Ombudsman on behalf of Thammasat University law lecturer Kittipong Kamolthamwong, who claimed the election process was flawed, unfair and unconstitutional.

Ombudsman Pornpetch Vichit-cholachai, as plaintiff, told the court that the fairness of the election had been undermined. He cited the failure to conclude the poll on a single day as stipulated by the Constitution because the election could not be held in 28 constituencies in the southern provinces, where there were no candidates, and candidacy registration was problematic.

Also, ballot counting in other constituencies, which were made public, would impact on the judgement of voters in the 28 constituencies rendering the election unfair, according to Pornpetch.

Moreover, the issuing of several orders by the caretaker government, including the emergency decree, was unfair to other political parties contesting the election, he argued.

Pornpetch said the general election had a severe social, political and economic impact. Although the government had returned power to the people, there were political rallies against the government, which made the caretaker government unable to completely perform its duties and risked becoming unlawful.

“This election exacted a high price as there were fatalities and many were injured. Some people even said if this electoral problem is prolonged and the caretaker government still performs its duty until the end of June, it could affect the country’s GDP growth rate,” he said.

“Why don’t we hold a legitimate election to pave the way for ‘good’ people to govern the country?” he said, adding there was no guarantee the EC would complete the poll in all constituencies.

Pornpetch insisted on the legal power of the Office of the Ombudsman to file the petition with the Constitutional Court.

Caretaker Deputy Prime Minister Phongthep Thepkanjana, who represented the prime minister, said The Office of the Ombudsman is not empowered to petition the Constitutional Court and the court has no power to accept the case.

“Actually, only 10 per cent of voting in the total of 375 constituencies were disrupted and the law empowers the EC to conduct a new round of voting. If you regard the new ball