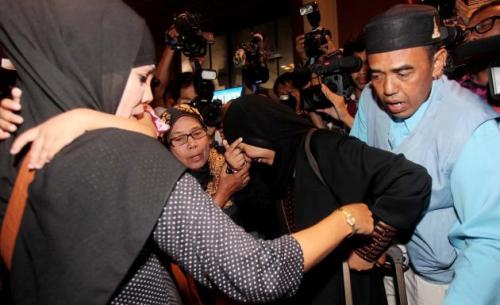 600 Thais flown back, 300 still in Egypt
The Nation / Phuket Gazette

PHUKET: More than 600 Thais have been evacuated from Egypt on flights arranged by the Thai government in the wake of the unrest which has so far claimed some 900 lives.

Another 300 Thais still remain on Egyptian soil as some have changed their minds about returning. With the number of returnees lower than expected, a C130 military aircraft of the Royal Thai Air Force (RTAF) flew back to Thailand without any passengers.

“Our aircraft waited for passengers at the airport in Dubai and left only after we were assured there were no more Thais wishing to fly back to Bangkok,” RTAF spokesman Monthon Satchukorn said yesterday.

According to the Foreign Ministry’s deputy permanent secretary Nuttavudh Photisaro, up to 704 Thais initially expressed a wish to return to Thailand. However, the number of passengers later dropped by several dozen. Nattavudh said the C130 from Thailand was instructed to wait until the very last minute the approved flight permit would allow.

It finally took off from Dubai at 1.30pm yesterday.

The first flight with Thais airlifted from Egypt, meanwhile, landed at Don Mu-eang Airport in Bangkok at 2.10pm yesterday afternoon. It carried 368 people. Immigration officials were on hand to facilitate their entry.

Health check-ups were also available for those who needed them.

The Bangkok Mass Transit Authority had 15 buses ready to transfer the arriving passengers to bus terminals or temporary shelters. Transport Minister Chadchart Sittipunt showed up at the airport to ensure the services ran smoothly. Two other flights carrying 260 Thais from Egypt in total were due to arrive at Don Mueang Airport at 10pm last night.

Prime Minister and Defence Minister Yingluck Shinawatra said it was the government’s duty to take care of Thais’ safety, no matter where they were. She said the Thai embassy in Egypt would open its doors to Thais around the clock and a “war room” was operating in Bangkok to facilitate co-ordination among all parties concerned.

Nattavudh convened a meeting yesterday of agencies such as the Public Health Ministry, the Social Development and Human Security Ministry and the Transport Ministry. The Office of Higher Education Commission (Ohec) has set up a special centre to provide help for Thai students who had to abandon their courses in Egypt.

He said most Thai students in Egypt had been studying Islamic Studies and Islamic Law.

“These courses are also available in Thailand-based institutes such as Prince of Songkla University’s Pattani Campus, the Princess of Naradhiwas Univer-sity, the Yala Rajabhat Univer-sity and the Yala Islamic University,” he said.

Apichart said Ohec would also try to negotiate with scholarship grantors to ask them to continue providing scholarships to the Thai students who had to leave their study in Egypt.

PHUKET: The Anti-Money Laundering Office (Amlo) has seized about Bt7 billion from convicted money-launderers and other criminals over the past 14 years of its existence, its secretary-general Seehanat Prayoonrat said yesterday.

He said that a large part of the seized assets, as much as Bt2.7 billion, was obtained last year and this year. An estimated Bt120 billion, or about 12 per cent of the country’s gross domestic product (GDP), has been involved in money laundering each year, according to the Amlo chief.

The money was tied to crimes as gambling, contraband smuggling, human trafficking, tax evasion, corruption, and illegal drugs. He said illegal gambling accounted for more than half of the laundered money.

“An urgent task is to strictly enforce the money-laundering law to seize assets from gambling dens,” the Amlo chief said.

Half of the money involved in money laundering cases was cash and 80 per cent of the offences were committed by criminal gangs, he said. Local criminal groups were responsible for 55 per cent of these cases and the rest involved foreign gangs.

PHUKET: The ruling Pheu Thai Party has joined forces with senators to push for the passage of legislation that would turn the House into a dictatorship and enable the government to “monopolise” power with absolute control in both houses of Parliament, Democrat Party Bangkok MP Ongart Klampaiboon alleged yesterday.

Parliament is today scheduled to deliberate in its second reading a bill that would amend constitutional articles involving the method of electing senators.

Ongart said Pheu Thai’s move to have all senators elected and remove appointed senators would greatly affect the country’s political structure, since the ruling party would easily acquire a parliamentary mandate through a majority.

“They have worked out this plan – it’s a case of ‘you scratch my back and I’ll scratch yours’. All Pheu Thai MPs have endorsed the bill with their signatures, along with some senators, to make it look like this was the intention of all parliamentarians [rather than the government alone]. From the beginning, this legislation has been an exercise in favouritism and nepotism,” Ongart said.

The Democrat MP said the content of the charter amendments is worse than some provisions of the 1997 Constitution, which was dubbed “Parliament of Slaves”. The new amendments could be dubbed the “Parliament of Dictatorship of the Senate”, Ongart said. The amendment would allow senators who side with people in power to appoint or remove independent agencies, and leave them merely serving those in power, he said.

Ongart said the government might also vote to pass three amendment drafts as House Speaker Somsak Kiatsuranont has already put the three drafts at the top of the agenda. They include amendments to Article 68, on constitutional rights to protect the Constitution; Article 237, on party dissolution and punishment of party executives; and Article 190 on parliamentary approval of ratification of agreements with foreign countries.