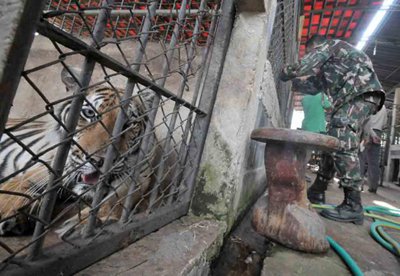 Located on an isolated 100-rai plot some 20 kilometers off the Mitraparp Highway, the compound was surrounded by barbed wired, guarded by attack dogs and equipped with 30 security cameras, all linked via internet to a monitoring station in Bangkok.

As Mr Yutthasak couldn’t show permits to keep the animals, officials put the property under armed guard and prohibited any animal transport pending further investigation. Mr Yutthasak was initially charged with illegal operation of a zoo and possession of protected species without permission.

Mr Yutthasak said he traded animals at Chatuchak Market in Bangkok before opening the private zoo. He didn’t hire full-time veterinarians to care for the animals, but hired them on case-by-case basis, he said.

The required permits were with his father Thanajak Sutthinon, who would present them to police later, he said.

Theerapat Prayurasiddhi, deputy director-general of the Department of National Parks, Wildlife and Plant Conservation, said most of the animals were protected under the Convention on International Trade in Endangered Species of Wild Fauna and Flora (CITES) and national wildlife protection laws. These included Tibetan red pandas, now extinct in the wild in that country, and 65 Marmoset monkeys, which can fetch 100,000 baht per pair on the black market.

Mr Theerapat said the compound was raided back in 2003, when officials found 100 protected animals held without permission.

The court fined the owner and gave him a suspended jail term, which has already expired. It would take three days to check wildlife papers, officials said.