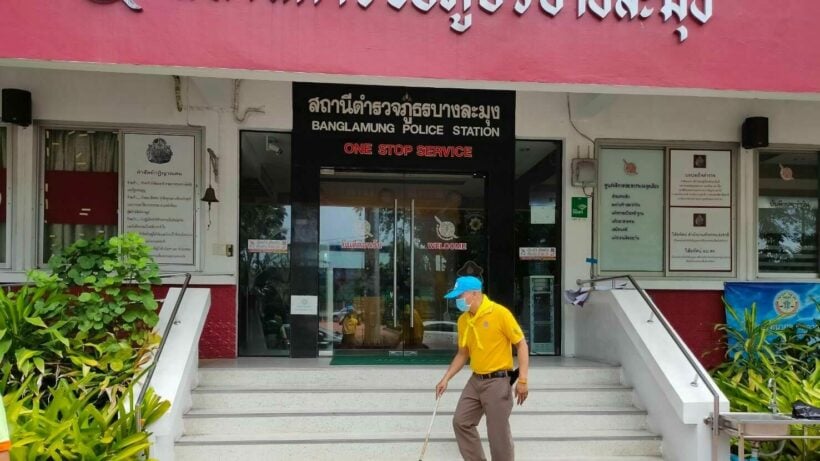 Yesterday in the Chon Buri province of Bang Lamung, which is part of Pattaya, a woman allegedly stabbed her boyfriend to death in a case of self-defence.

Bang Lamung Police and first responders got to the scene just after midnight. There, they found 36 year old Anuwat Ratchawong lying in front of the house. He was bleeding profusely from multiple stab wounds. The man’s girlfriend, 28 year old Nuchthida Sombatwong, says Anuwat attacked her.

First responders attempted to save Anuwatet, but he was later pronounced dead at the scene.

Nuchthida says that she and Anuwat had a “heated discussion” about breaking up. She says that they had previously agreed that if the relationship wasn’t going to work out, they would finish it off verbally and peaceably. Despite this prior consensus, Nuchthida says Anuwat got aggressive and hostile when she told him she wanted to break up.

She says that she grabbed a kitchen knife and fled from Anuwat as he chased her around the house. Nuchthida warned Anuwat not to attack her, but she says he dared her to stab him and started to attack her with his fists. Then, out of self-defence, and not out of a desire to kill Anuwat, she took him up on the dare. Nuchthida says Anuwat collapsed from being stabbed and she then had a friend call police.

Thai media says Nuchthida was sobbing and distressed at the scene. Police say they found a kitchen knife with bloodstains on it at the house.

Police brought Nuchthida to the station for further legal proceedings. They say they are reviewing the case to see if any charges will be lodged against Nuchthida. Police say she has been cooperative.

Last month, another woman was taken to the Bang Lamung Police Station after she admitted to stabbing her husband to death. The stabbing implement was reportedly a butcher knife.

Soidog
2 hours ago, Ddm said: What I take away from this story is don’t be around knives and jealous women Don’t be around Thai women when you piss them off is what we should all take from it. The transformation…

colinneil
2 hours ago, Ddm said: What I take away from this story is don’t be around knives and jealous women Been there had that, got a scar, but no Tshirt.?
Bangkok_Gary
"Yesterday in the Chon Buri province of Bang Lamung..." Um, no. Bang Lamung is a district in the province of Chon Buri.
chachaisen
18 hours ago, Thaiger said: Yesterday in the Chon Buri province of Bang Lamung, which is part of Pattaya, a woman allegedly stabbed her boyfriend to death in a case of self-defence. Bang Lamung Police and first responders got to…
DiggR
Hmmm, something doesn't add up....... Multiple stab wounds from "l dare you to stab  me" unless there was a double dare followed by a triple dare followed by a ............ Another tragic ending to a love story