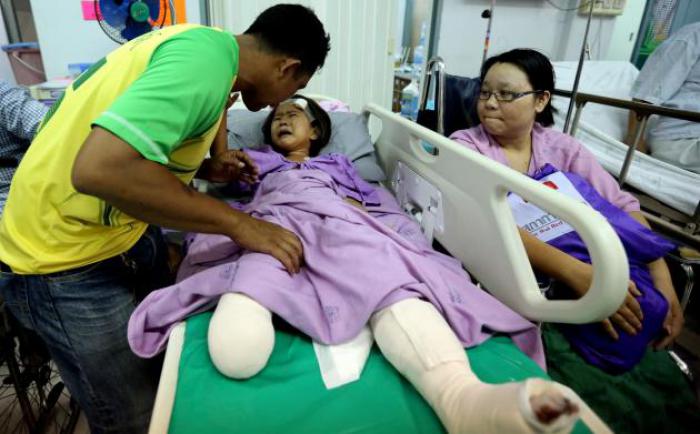 PHUKET: Among the many victims of simultaneous bomb attacks in Pattani last Saturday were the Sideh family. They lost a son, Isfan, and their bread-winning father was hurt too badly to continue working as a taxi motorcyclist.

His wife Rohima awoke in hospital, where their second child is still being cared for.

Rohima said she had not told husband Ishoh about the death of five-year-old Isfan, who passed away the next morning, for fear the news would set back his recovery.

Rohima said the four family members were heading home on a road in Muang district on Saturday when a power pole, broken off by an insurgents’ bomb, fell on them.

She said Ishoh remained in an intensive-care unit, while their other child was recovering and almost ready for discharge. Rohima said she still had pains in the chest, after waking up in the hospital.

Rohima said she worked as a housemaid and it would be difficult for the family as Ishoh would be incapacitated for a while. With two other children, the family is poor already, living in an unregistered house and without their own electricity. The house is walled on one side with tin sheets and on the other with old, worn-out bamboo.

Mana Saree, an official with a local administrative body, said he stayed inside during the bomb attacks and kept counting them until he fell asleep. He said the electricity was still disconnected by the next morning.

Nureehan Tha, an official with the Muang Pattani district office, said she felt it was like a war after the blackout, and she needed to use a flashlight when travelling on a motorcycle with a headlight that was not bright enough.

Maimunoh Ali, a Muslim villager, 38, said the blackout caused by the attacks was frightening and she hoped it would never occur again.

Nusra Poota, a 16-year-old villager, said she was left crying in the dark in her house after the blackout..