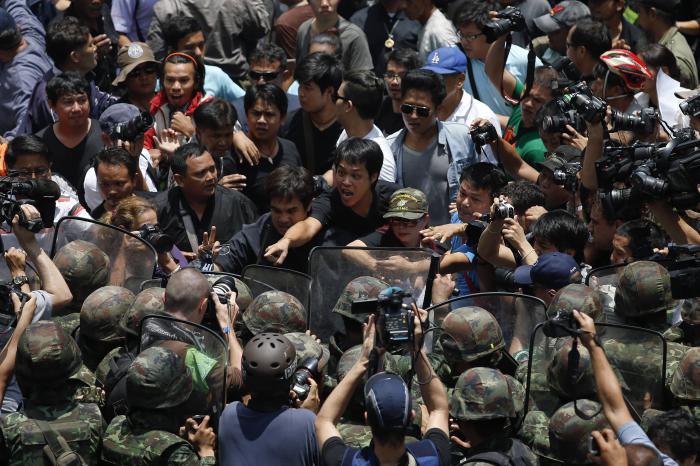 PHUKET: General Prayuth Chan-ocha yesterday threatened tougher action against law violators, particularly opponents of the military’s power seizure, in a move that is in line with the junta’s priority of maintaining law and order.

Prayuth, however, did not answer a reporter’s question as to whether he would become interim prime minister.

“It’s not time yet [to discuss this]. There is a plan already for that. Be patient. There will definitely be a prime minister,” Prayuth said, adding that there would also be new Cabinet members.

He said the next election would be held “as soon as possible, when the situation permits” although he could not say when as it would depend on the situation.

Speaking at his first press conference since last Thursday’s power seizure, Prayuth said the junta would enact political reforms and focus on solving the country’s problems, starting with making overdue payments to rice farmers under the previous government’s rice price-pledging scheme. “We will set up new organisations to reform every aspect that causes problems and conflicts,” he told the press conference.”

He said he would name an interim prime minister and a legislative council to implement electoral reforms and measures aimed at bolstering the economy.

Earlier yesterday, Prayuth and other members of the National Council for Peace and Order (NCPO) took part in a ceremony to receive a royal command endorsing him as head of the NCPO.

Prayuth said that to maintain peace and order there would be “a more intense enforcement of the law” against resistance.

“If the situation improves, the different measures will be eased. Do not worry. We don’t want to cause problems for you,” he said. “We will focus on law violators, use of war weapons, resistance or any action that disrupts peace in the country.”

He said a curfew would remain in place from 10pm to 5am, as it was still needed, although people affected could inform the relevant authorities about their problems.

On Sunday, in a stern move to tighten security, the NCPO announced that any offences against the monarchy and national security, as well as violations of its orders, would be tried in a military court.

Hundreds of anti-coup protesters gathered at Victory Monument yesterday while a small group of pro-military demonstrators gathered at Democracy Monument. Another group of about 30 people, led by senior Foreign Ministry official Sasiwat Wongsinsawat, gathered near the ministry on Si Ayutthaya Road to offer moral support to the military.

At his press conference, Prayuth emphasised his full power to rule and called on the public to understand the military’s sincerity. He said they would do their best to solve problems as soon as possible.

“I’m not here to fight but to fix. I will do anything [to solve the problems],” he said, explaining the tough measures but stressing they were necessary.

“The less you allow me to speak, the more I’ll be able to work. Please be calm and patient, like you have always been. Crisis has plagued the country for nine years now.”

The NCPO chief also warned the media against amplifying conflicts. He said if the media used Facebook to create comments that escalated conflicts, the NCPO would summon them and media organisations would not be able to help.

He said he would start monitoring the media, Facebook and websites and would regard the posting of messages that incite conflict as violations against peace and order.

Referring to the summons to political figures, he said none of those asked to report were suffering, though their accommodation demonstrated to them how soldiers lived.

Prayuth said he would urgently form a team of experts to advise the NCPO in running the country.

He said the advisory team would have experts from various fields and would be the top-tier advisory panel. There would be also lower-level advisory teams to advise the NCPO members in charge of various tasks.