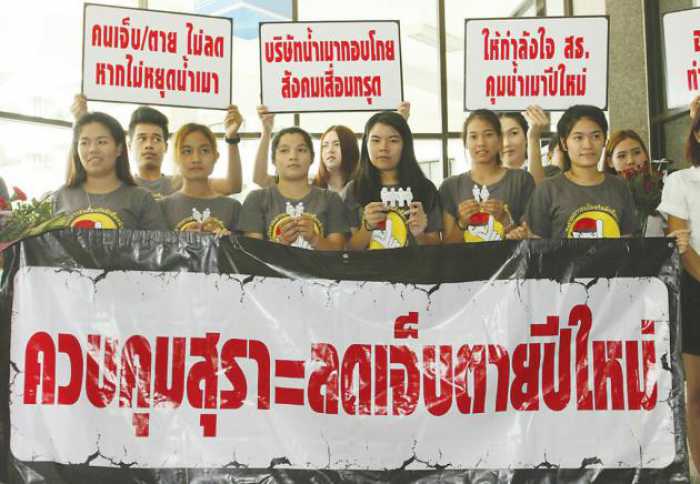 PHUKET: Partygoers will be able to buy booze during New Year celebrations as the Alcohol Control Committee has decided to defer its decision on banning the sale of alcohol during this period.

The ban was proposed on grounds that alcohol consumption is responsible for hundreds of road deaths during the New Year holidays every year.

“We believe further studies are necessary as we need to take into account diverse opinions in society. Banning alcohol would affect a huge number of people,” Public Health Minister Rajata Rajatanavin said yesterday in his capacity as the chair of the committee.

He denied that the decision was related to Prime Minister General Prayut Chan-o-cha’s comment that he had no objection to the sale of alcoholic drinks during the holiday season. Prayut, who also heads the National Council for Peace and Order, made this comment earlier this month in response to questions about the proposal to ban alcohol over the New Year and during the Songkran festival.

Rajata, meanwhile, said more comprehensive surveys and studies were required before the Alcohol Control Committee could decide whether to impose this ban in the two key periods. However, he said the committee had already approved the Disease Control Department’s proposal to ban the sale of alcohol at public piers, transport stations, and state agencies and enterprises.

No alcohol on key Buddhist days

“We have also resolved that no alcohol will be sold on the day marking the end of the Buddhist Lent,” he said.

The sale of alcohol is already banned on other days that are religiously important, such as Visakha Bucha, Makha Bucha and Asalha Bucha days.

Theera Watcharapranee, manager of the Stop Drink Network Office, said he respected the Alcohol Control Committee’s decision, “but we will gather more information to support the ban. We will still have time to gather information for the Songkran period [in mid-April].”

More than 40 people showed up at the Public Health Ministry’s Office of the Permanent Secretary yesterday to call for a ban on alcohol over the New Year and during Songkran.

According to the Youth Network of New Face Drinker Prevention, 367 people were killed and 3,344 others injured in road crashes over the seven dangerous days of New Year’s celebrations previously.

“Nearly half of the road accidents were related to drunk driving,” the network’s coordinator Teerapat Kahawong said.

Warrants issued for police over links to online gambling