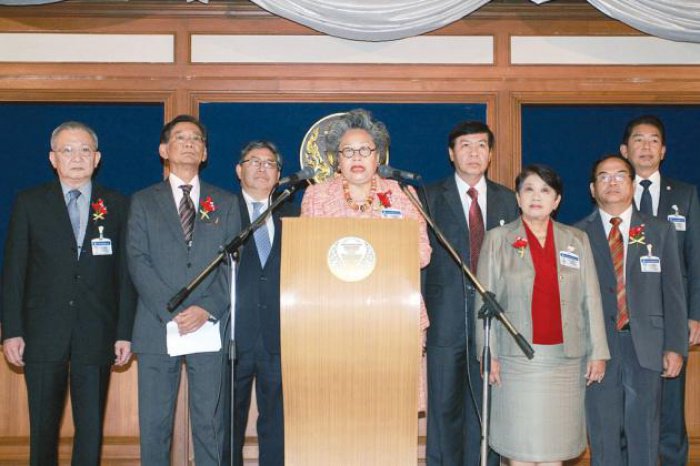 NLA panel to summon US envoy
The Nation / Phuket Gazette

PHUKET: The spat between Thailand and the United States looks set to continue with the National Legislative Assembly’s foreign affairs committee planning to summon the US charge d’affaires to explain the recent criticism by a senior American official, which has been perceived as interference in Thailand’s internal affairs.

Bilaibhan Sampatisiri, chairperson of the NLA panel, said yesterday that US charge d’affaires Patrick Murphy would be invited to appear before the committee for “some talk and explanation about what happened”.

She was referring to a remark by Daniel Russel, the US assistant secretary of state for East Asian and Pacific affairs, that the impeachment of former prime minister Yingluck Shinawatra could be politically motivated. Mr Russel had also called for the lifting of martial law. The visiting US official made his comments in a speech at Chulalongkorn University on Monday.

“He should have realized that Thailand needs martial law and the justice process to retain peace. These are considered internal affairs,” Ms Bilaibhan said.

NLA member and former ambassador Kitti Wasinondh yesterday said allies should have mutual respect and good understanding between them.

On Wednesday, the Ministry of Foreign Affairs summoned Murphy to express disappointment over Mr Russel’s comments, in a move viewed as an attempt to protect what Prime Minister Gen Prayut Chan-o-cha called national dignity. Mr Russel was the highest-level US official to visit Thailand since the coup last May.

Pornpetch Wichitcholchai, president of the NLA, which voted overwhelmingly to impeach Ms Yingluck, yesterday defended the assembly’s verdict. He said the decision was based on legal principles and the rule of law.

“It seemed Russel mixed up impeachment and martial law although they are completely unrelated,” he said. The NLA president added that after staging the coup, the National Council for Peace and Order managed to end violence and now was “sweeping the house” to make way for a stable democracy.

He said the US seemed to believe that an election was tantamount to being a democracy, without taking into account the political context of individual countries.

NLA member Kittisak Ratanawaraha, during yesterday’s assembly meeting, criticized the US assistant secretary of state for making remarks he deemed an interference in Thailand’s internal affairs.

“He should better mind his own business. What he did was an interference in Thailand’s legislative affairs. The US should not stick its nose into our affairs,” Mr Kittisak said.

Following strong reactions from the government, US envoy Mr Murphy yesterday stressed the US standpoint over the issue.

“We will continue to urge the Thai government to take necessary steps to bring the country back to democracy. We believe it is a matter for the Thai people to work together to build a democratic future; we don’t take sides,” he said in his Twitter messages.

In Washington DC, US State Department spokeswoman Jen Psaki yesterday reiterated the US call for more inclusive politics and an end to martial law, Reuters reported.

Both Mr Murphy and Ms Psaki were responding to angry reactions from government figures over Mr Russel’s remarks.

Meanwhile, security expert Panitan Wattanayagorn said yesterday that it was possible that some former Thai politicians were working with certain American interest groups, resulting in the latest US move against Thailand.

Panitan is an adviser to Deputy Prime Minister and Defence Minister Prawit Wongsuwan.