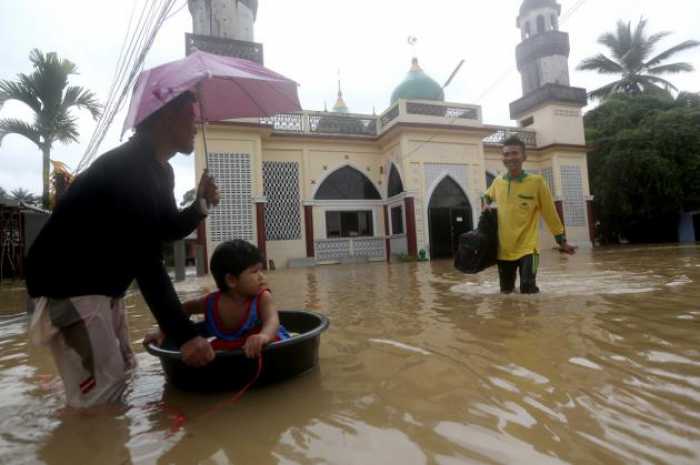 PHUKET: As the National Disaster Warning Center issued a warning yesterday that nine provinces in the South face the risks of floods and landslides until Saturday, a soldier died in a boat accident while helping villagers escape deep flooding in Narathiwat province.

In Yala’s Than To district, a landslide killed a seven-year-old girl and injured her parents.

Master Sergeant First Class Channarong Malicheun of the Narathiwat Special Task Force 36 was killed late on Wednesday night as the flat-bottom boat that his team was using to remove locals overturned and sank in the strong currents of Sungai Kolok River in Sungai Kolok district. As of press time, his body had yet to be found.

The situation in the province is critical, as Sungai Kolok, Bang Nara and Sai Buri rivers have overflowed by two meters, causing the Sungai Kolok border pass to be temporarily closed. People are advised to use the Tak Bai border pass instead.

With Sukhirin, Waeng and Tak Bai districts already declared disaster zones, Narathiwat Governor Natthapong Sirichana said the situation in six other districts was also being closely monitored. Nine schools in Waeng and Sukhirin had to cancel classes due to the two-metre-deep floods.

Meanwhile, three districts in Yala province – Krong Penang, Muang and Yaha – are inundated and a landslide onto a home in Than To district at 2am yesterday killed a seven-year-old girl and injured her parents.

In Songkhla, the provincial disaster-prevention office is planning to ask the governor to declare 19 subdistricts in Haad Yai, Sadao, Khlong Hoy Khong, Nathawee, Chana, Thepa and Saba Yoi districts as disaster zones. The Haad Yai Municipality is closely monitoring the situation as run-offs from Sadao and Khao Kaew mountains are causing its waterways to rise. Eight communities are at risk.

In Surat Thani province, where it has been raining continuously, officials have put up red flags in beaches, including those on Koh Samui and Koh Pha-ngan, to warn tourists to stay clear of the 2m-high waves. The situation in Chaiya district, which was worst hit, is improving.

Meanwhile, temperatures up North in Chiang Rai province have dropped to 8-11.5 degrees Celsius, prompting provincial disaster-prevention official Sawang Momdee to call on donations of warm clothes for 260,000 affected people in the mountains.

Separately, a 69-year-old ailing man died from exposure to cold weather in the northeastern province of Nakhon Ratchasima.

Marine Police exchief admits to B150mn in bribes; hundreds of police to be reassigned