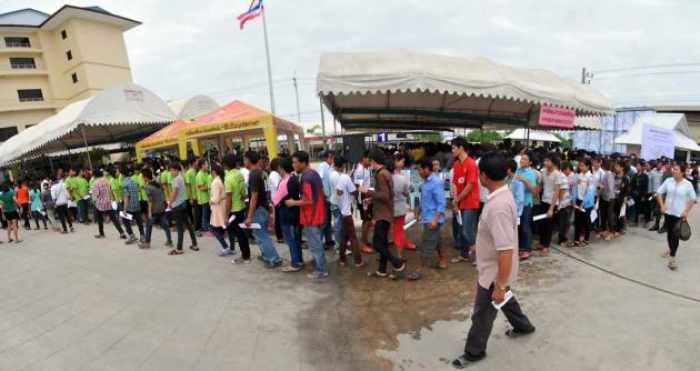 PHUKET: The National Council for Peace and Order has ordered a serious effort to bring foreign migrants into the legal workforce in a bid to minimize the impact of the recent Cambodian labor exodus and the country’s human-trafficking reputation.

The plan includes the establishment of one-stop service centers around the country for migrants from Myanmar, Laos and Cambodia.

The first centre opened yesterday in Samut Sakhon, which has a high number of workers from Myanmar.

“With such centers, migrants will be able to complete their registration as legal workers in just 30 minutes, instead of nearly three hours,” General Sirichai Distakul said yesterday in his capacity as chairman of the National Council for Peace and Order’s committee on migrant worker issues.

Gen Sirichai said centers would be opened in 22 other provinces in the near future.

The general expects the centers will boost transparency and end problems related to exploitative agents.

Millions of Myanmar, Laotian and Cambodian workers work in Thailand. Many of them, however, are illegal immigrants at risk of arrest and exploitation.

Fearing for their safety, about 200,000 Cambodians fled Thailand last month amid rumors that the junta had launched a crackdown. Some had not even been paid.

The legal return of Cambodian workers is crucial for various industries as Thais, for example, tend to shun construction jobs.

When migrants register, it will be easier for authorities to enforce laws and protect them from corrupt officials and human traffickers.

More efficient control of migrant workers would improve the country’s image, which was tainted by the US State Department’s recent move to downgrade it to the lowest tier on its Trafficking in Persons report.

Many countries have threatened to take action against Thailand for its poor record in combating human trafficking and failing to protect people from trafficking gangs.

“We believe there are about 100,000 illegal workers in Samut Sakhon,” he said.

While illegal migrants are apparently keen to register, Sirigorn Leardchayopit of the Raks Thai Foundation is worried about what will happen to them.

“Following registration at the one-stop service center, workers can stay in Thailand legally for just two months. What if they can’t have their nationality verified before the deadline comes?” she said.

“And how will the NCPO treat the workers’ dependents later on? In Samut Sakhon alone, there are more than 10,000 children of foreign migrants.”

Gen Sirichai said the NCPO would consider additional measures for workers who could not verify their nationality within the two-month deadline.

Labor Ministry inspector general Anurak Tossarat believes the NCPO will extend the deadline if the nationality-verification process cannot be completed in time.

“Relevant authorities will also explore measures for their dependents. I believe there will be no harsh policy against them,” he said.