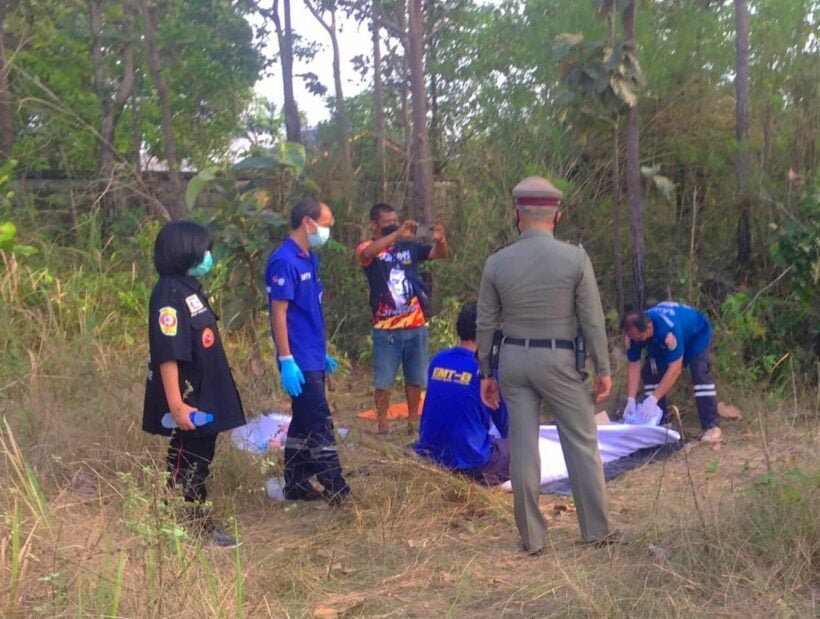 Two suspects in a murder investigation have been arrested after a dog found the remains of a police officer’s missing brother in a forest in Thailand’s Isaan region. Officers are still searching for four other suspects.

A farmer taking his cows out to feed near an abandoned shoe factory spotted a dog carrying a human skull out of a eucalyptus forest in the northeastern province of Ubon Ratchathani yesterday and when police searched the area they found human remains and scraps of clothes.

A police officer from a district around 50 kilometres away came to the scene and confirmed the long-sleeved black shirt, camouflage shorts and white trainers belonged to his younger brother who went missing 24 days prior. Police have identified two young men as suspects in the case.

On March 5, the policeman’s younger brother, 36 year old Suten Tharabhoot, went missing from his home in Warin Chamrap District of Ubon Ratchathani following an altercation with his 20 year old stepson and his friend.

The policeman, 56 year old Eknarong Tharabhoot, tried to contact his brother Suten for a few days but couldn’t get a hold of him. Suten’s wife of two years, Jariya, had fled her home with her son. Eknarong went to Jariya’s mother’s house to see if he could find them but Jariya’s mother said she hadn’t had contact with her daughter in two years and was raising three of her daughter’s children. Suten was filed as a missing person at Warin Chamrap police station.

Khaosod reported that Suten had argued with his 20 year old stepson who brought his friend of similar age to the house to attack Suten. Suten slashed his stepson’s friend with a knife, causing the two young men to flee the house. Suten left his house on a Honda wave motorcycle carrying a long sword and never came back to the house again. After that, Suten and his mother Jariya fled the house.

Police suspect Suten’s stepson and friend killed Suten and hid his body about a 40 minute drive away in the eucalyptus forest near the abandoned factory in Phibun Mangsahan district. Police are seeking an arrest warrant and expect to prosecute the suspects soon.

Forensic officers collected evidence at the scene and Suten’s body has been delivered to the police hospital for an autopsy to be carried out. The autopsy will provide DNA to confirm Suten’s identity and will also be used as evidence in the prosecution of Suten’s suspected murderers. According to the Bangkok Post, police have arrested a 20 year old man and an 18 year old man.