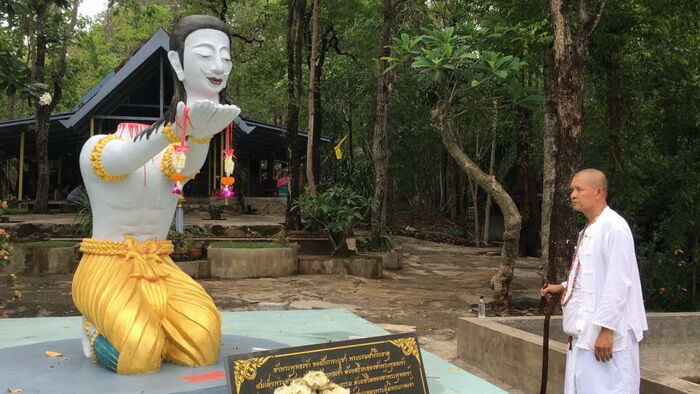 A monk, apparently ‘seeking nirvana’, has beheaded himself with a handmade guillotine in the northeastern province of Nong Bua Lamphu. Police are now investigating to determine if any of the monk’s followers should be charged for helping the abbot with his untidy path to enlightenment.

The monk, Dhammakorn Wangphrecha, reportedly spent 5 years planning his death and believed it would help him reach nirvana, his followers say. They say he decided to die last Thursday, on his 68th birthday. The guillotine was made with a metre-long blade and 2 buckets of cement held up by rope. It was placed near a statue of a beheaded deity. Followers say the monk cut the ropes himself.

While police say evidence say it’s a case of suicide, followers who moved Dhammakorn’s body could face charges for concealing a corpse. The guillotine had also been disassembled when police arrived, and followers could face other charges for tampering with evidence. If police discover that followers helped the monk build the guillotine, they could be charged with conspiracy to commit murder.

Police found the monk’s body in a wooden coffin at the Wat Phuhingong Monastery. They say around 300 people attended the monk’s funeral just hours after his death. Police did not say how many followers are now suspects in the investigation.

PM Prayut Chan-o-cha spoke after the death of the monk, warning Thais not to put too much faith in superstition, and psychiatrists visited the monastery to do mental health checks.

“I ask you to not put too much faith in something unscientific, as the Buddha taught that his words can be proved… Everybody must have some logic to believing or respecting something. I don’t think anybody wants to imitate.”