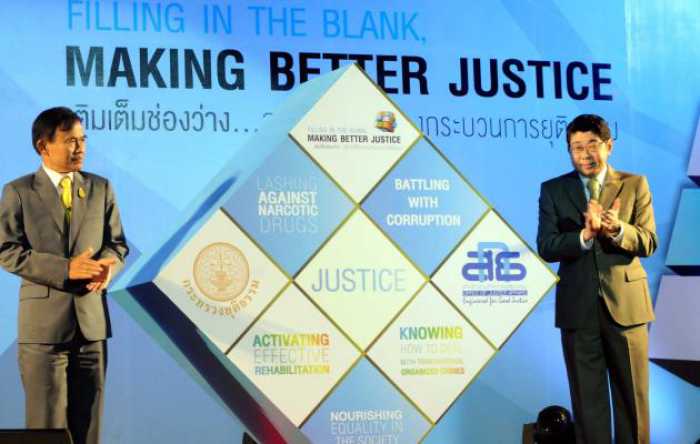 PHUKET: A State Justice Fund needs to be boosted and made easier to access so that poor people who face legal charges get equal access to bail, Justice Minister Gen Paiboon Khumchaya said yesterday.

“I would be glad if a billionaire and someone with just 10 baht had equal access to justice,” the minister said. Gen Paiboon is also a deputy leader of the military junta in charge of justice.

The general gave a wide-ranging outline of his views on the justice system to the public yesterday at the 13th National Symposium on Justice Administration at Queen Sirikit Convention Center in Bangkok.

He admitted that he’s tired because he has no legal background, but since taking office he has recognized that the Justice Ministry’s responsibility is huge and important.

“There are many good proposed laws that have never been passed because various state agencies are at odds with one another, or because it affects vested interests groups,” he confided.

Gen Paiboon added that the current military-led administration and the junta-appointed National Legislative Assembly would, however, seek to pass 151 bills during its term.

‘A chance to defend themselves’

In regard to the Justice Fund, Gen Paiboon said an agreement was signed with the National Police on December 8 to get police to inform people of their rights and to make free lawyers available, plus bail money, at more police stations.

“We just want everyone to have the chance to defend themselves fully in the judicial process. Many were imprisoned simply because they had no access to bail money.” He added that no one would want a family member to be in such a situation.

Gen Paiboon acknowledged that many people in rural areas still did not know about the Justice Fund, but said the ministry was trying hard to spread the word among the rural poor.

Another problem cited by Gen Paiboon is that in some far-flung areas there may be a court but no other justice-related state offices, which reduced local people’s access to justice.

Other justice issues included so-called stateless people born in Thailand who do not readily earn Thai citizenship. Gen Paiboon said these people were often refused access to basic education, rendering them illiterate and a burden on society.

The minister said the issue of citizenship should be separated from access to basic education.

On drugs, Gen Paiboon questioned whether small-time drug takers should be imprisoned and wondered if jailing such people was the right way to deal with the issue.

Deputy Prime Minister Wissanu Krua-ngam, who gave an opening speech at the symposium, outlined three gaps in the justice system: people’s access to it, people’s distrust of court verdicts, and the gap among various justice-related organizations.