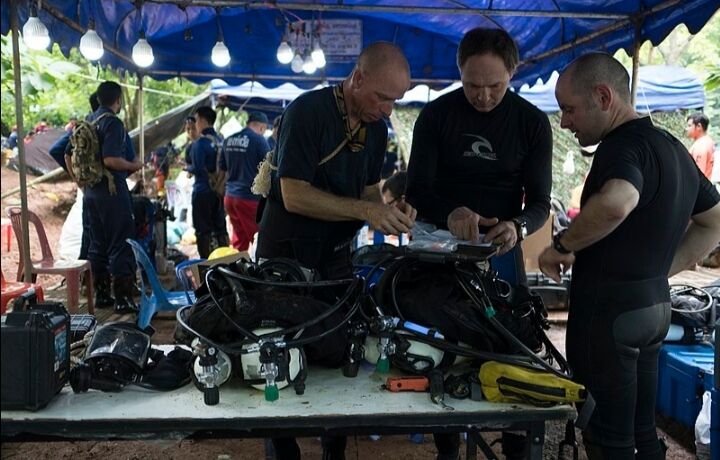 Divers draw up a rescue plan on set for the upcoming film "Thirteen Lives." Credit | IMDb

The film follows the true story of a group of young boys and their soccer coach, who were trapped for weeks in the flooded Tham Luang caves in July 2018 in Chiang Ria province near the Thailand-Myanmar border, prompting a heroic international rescue mission to save all 13 members from certain death.

In an important benchmark of potential box office success, the film received an 86 definite recommend and a 97 in the top two boxes in test screenings for “the highest scores in MGM history,” Deadline reported, increasing producer’s confidence in the film’s theater value and ability to win big later this year.

Originally scheduled for April 15, Thirteen Lives is currently set to debut in US theaters on November 18. The documentary stars Viggo Mortensen, Joel Edgerton and Colin Farrell, and is co-produced by Imagine Entertainment, Magnolia Mae and Storyteller Productions.

It’s the latest in a series of recent cave-rescue films — this one undoubtedly blessed with a blockbuster budget — and stars an ageing Viggo Mortensen of The Lord of the Rings acclaim. And who better to play the hero than the man who portrayed Aragorn, King of Gondor, and the wilderness survival savvy Ranger of the North? Except this isn’t some fantasy story in Middle Earth, but a real life-or-death scenario played out in the Land of Smiles.

Local moviegoers might recall this isn’t the only film to tackle telling the tale of the junior association football team’s 18 day fight for survival in the flooded underground cave network. Tom Waller’s The Cave – Nang Non debuted in theaters around Thailand in November 2019. It was followed by last year’s The Rescue, directed by Elizabeth Chai Vasarhelyi and Jimmy Chin.

Meanwhile, this year’s Academy Awards, which traditionally was scheduled for February, has been pushed back to March 27 at The Dolby Theatre in Los Angeles.