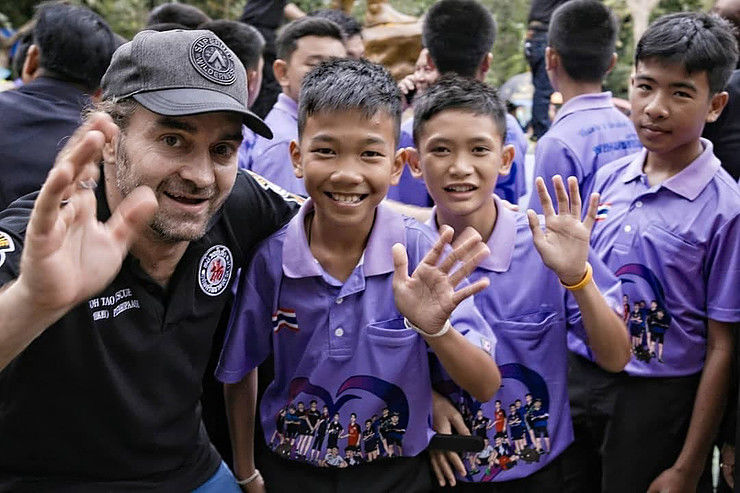 Now that is has been a year since the successful rescue of the Thai football team and their coach from the Tham Luang cave, I think it would be appropriate to share some footage from inside the cave to show how it looks like after the operation and without the muddy water.

As we know, the 13 kids got out just in time before the cave system flooded again. A few rescuers ended up having to hold our breath to dive out to safety. The cave then stayed flooded for 9 months, until March this year, after which we could finally reach the chamber where the team took shelter for 17 days waiting to get out.

After a week of diving the cave system last year in zero visibility, I had absolutely no idea how the restrictions looked like or how was the chamber where the boys stayed nor did I know if there would have been alternative route to the kids. I had my head full of questions that needed answers so that I could get peace of mind.

Read his full account with lots of videos HERE.

When I heard in January that there was a plan to attempt to re-enter the cave, I volunteered immediately. I was called in, together with cave experts Vern Unsworth and Joshua Morris, a Thai Navy SEAL, local park rangers, and other rescue personnel, to survey the cave conditions and document the massive amount of equipment left behind when the floodwaters forced us out.

Inside the cave, there was literally tonnes and tonnes of all sorts of equipment that was used to keep the water levels down and support the diving attempts during the rescue. We found tens of kilometres of different kinds of hoses, zip lines, electric lines, telephone lines, hundreds of air cylinders (there was even one tank still jammed in the cave ceiling reminding us of the power of the floodwaters), dive equipment, industrial pumps, tools etc. I also found some of our team’s equipment that we left behind, but this time we were not allowed to touch anything. 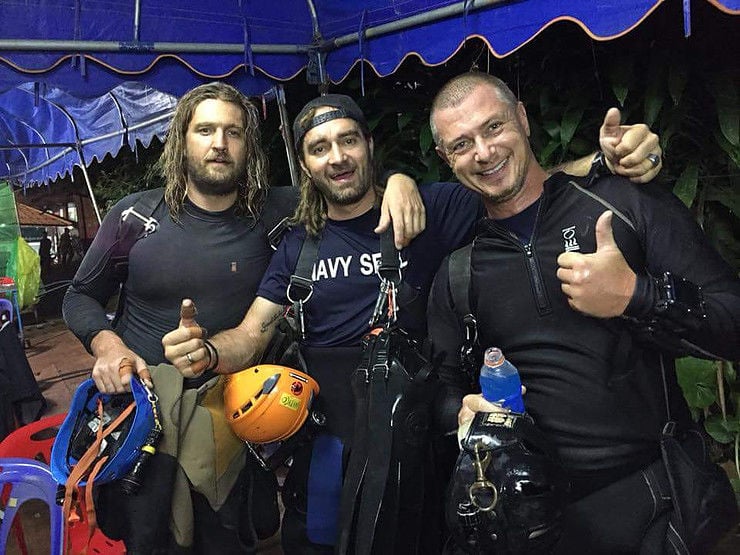 “Those who say it cannot be done, shouldn’t interrupt people doing it” – 13 kids all out safe and sound!

To our surprise, once we got to the T-junction (about 1.7 km in) we found out that the passage leading to the chambers #7, #8, and #9 was still blocked by the floodwaters after 7 months and we didn’t get the permission to dive in so we had to turn around to come back another time.

We had gathered enough information on the state of the cave by now, so the Army could start forming a plan on how to move the equipment out and clean the cave, so that it could be opened to the public again next year.

The next attempt to get to the last chamber was planned for March, and the removal of the equipment would start then. By March the water level had dropped down enough to allow us to go further, but the Navy SEALs hit a dead-end approximately 2 km in, near the chamber #8. The sand level at that area had risen so high that it had blocked the whole cave system and there was no way in.

Our team was called in again, but this time to find a way through the sediment and to connect the now separated systems together.

Once again, I flew to Chiang Rai where Vern picked me up. We drove to Mae Sai, met up with Josh and his team of cavers from CMRCA, formed a plan and went in. This time we entered the cave with shovels. The plan was simple, we will dig our way in.

By the time we got to the cave, most of the equipment had been taken out. We found it fairly easy to get to the end of the cave where the sand met the ceiling.

To me it looked like there was no way of finding the right place to start digging. We had no idea if we would need to dig 10 or 100 meters to get through. Fortunately, for Vern and Josh, this wasn’t the first time in this kind of situation. After a little sniffing around the corners, they gave me a shovel and told me to ”start digging, get us out of here”! This would be my final test to earn my dry caver wings.

Over four hours and about 15 metres of digging later, we pushed through to the other side. Now the cave was reconnected again. Never have I ever felt more claustrophobic than here, digging my way through sand and mud, 2 kilometres inside a mountain, in a space the size of a coffin, with almost no air to breathe… not even when I was diving this same spot months ago.

Finally we were all through, and could find the way into the ”Sam Sao”, the chamber where the kids stayed.

The sand level was so high that it was impossible to recognise any of the places. We also realised that it would have been completely impossible to keep the children alive, and the life-line open to them, during the long monsoon, had they been left inside to wait for the cave to dry.

Once we reached the last chamber, we were greeted by a flashback of memories on what happened here in June/July last year. To our surprise, the chamber was at Pattaya beach and not after it, as told by many stories. Also, the size of the chamber was a surprise! How giant it was, measuring over 50 metres in length and over 10 metres in height, giving the kids plenty of dry ground to stay on. Everything was intact with all the space foils, air tanks, and other rescue equipment all over the place.

At the upper end of the chamber, there was a 6 metre deep hand dug tunnel, a desperate attempt to escape. Right next to it, there was a simple altar with some decorations and a 20 baht note that the boys had offered to the spirits to help them get out.

I remember thinking that this note did its job and was well spent, since here we are now. The youngest of the boys is now 12 and living his life fully. We took that note back, and it is now on display at the Rescue Museum in Mae Sai.

On the next day, we returned to the chamber. This time with the Navy SEALs and one of the boys, who was kind enough to tell us their story while sitting in the actual spot where it all happened. You can only imagine the emotions going through us at that time.

Later that day, we walked to the far end of the cave to discover many writings on the walls. These were writings by the desperate team of 13 young boys trapped in the dark.

As a conclusion for my search of answers, I can now say that the restrictions in the cave during the dive were pretty damn narrow. Even if at some point there would have been more space, we always had to push through and follow the line, we could not let go of the line. Also just the sheer amount of sand in the cave after the monsoon would have made the access to the kids impossible, had they been left there over the rainy season. And last, seeing the chamber #9 and its size makes it easier to understand how the kids were able to survive through the 17 days.

We got a million other answers too, learned a lot about the situation and I got to document the whole cave system during those first visits back to the cave. However, I will keep the secrets to myself, for now.

Amazing being the first ones in Sam Sao (9th chamber) after the rescue operation. 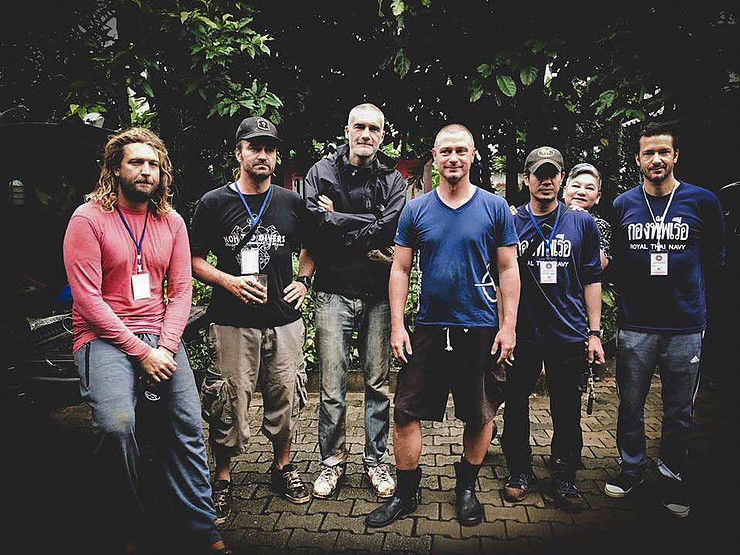 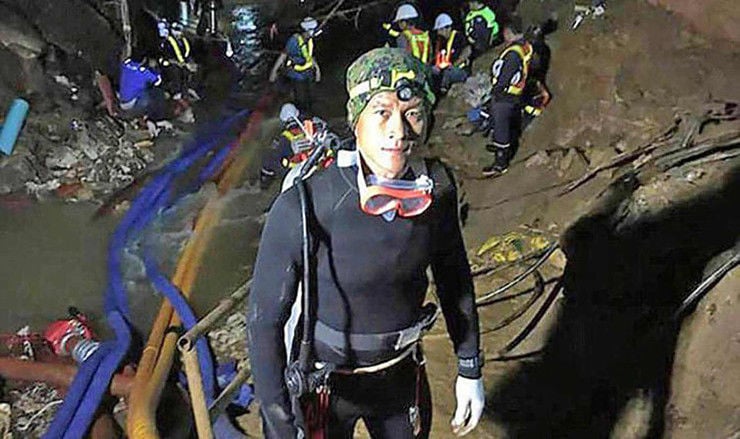 “Medical tourism is not making care for Thais more expensive”