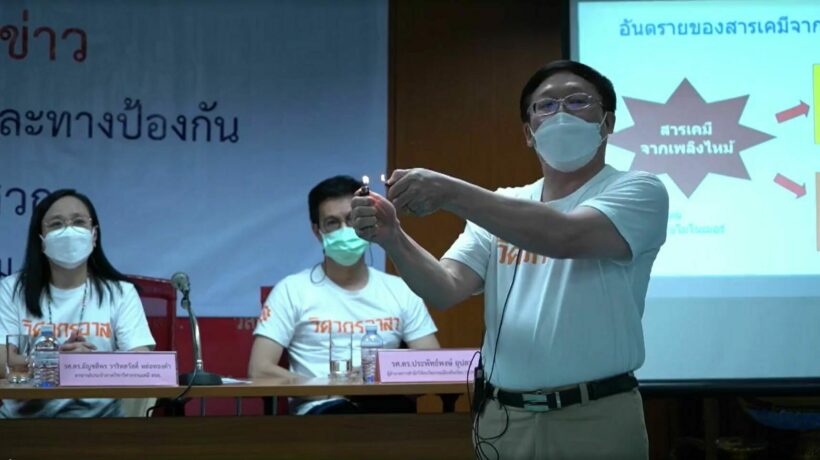 In a press conference today, the Council of Engineers of Thailand said that a chemical leak is probably the cause of Samut Prakan plastic factory fire that was just put out today after blazing for over 25 hours.

A chemic engineering professor, Anchaleeporn Waritswat Lothongkum says the leak could be of the styrene monomer or pentane.

The COE says that the Ming Dih factory contained up to 2,000 tons of chemicals, including 1,600 tons of styrene monomer, which is incredibly flammable. Thus, they are not surprised black mushroom clouds of smoke ballooned into the sky, visible from kilometres away. They add that this smoke can contaminate water resources.

Yesterday, the factory manager allegedly told police of a chemical leak, but added, helpfully, that he was not certain what leaked or how.

Professor and COE president Dr Suchatvee Suwansawat, says that the fire should only have been extinguished with firefighting foam, not water. The issue being contaminating Thailand’s water. Foam cools and coats the fuel, which is more effective at stopping a chemical fire, says the professor. Yesterday, firefighting foam and water were used to combat the fire.

Dr Suchatvee recommends the use of a “big data” database to monitor chemical levels throughout the country. Also, to actively check M2.5 and PM10 levels in case evacuations orders need to be executed quickly.

AlexPTY
Is he actually trying to light something as a proof? Charming... Obviously, if it contains 1,600 tons of styrene monomer, is could be a styrene monomer, or anything else, including insurance, negligence, foul play, meteor. Thank you got good informative article, i am happy that…
tron
This is true about the foam, but if you have a pressured fire as in this case it will not go out. You need to shut off the fuel valve. You need to firefighter to use a water spray and…
Objectivance
"Engineers." Guess we're throwing that around fairly loosely.
uanmak
chemicAL engineer

JamesE
The reporter seems to be blessed with a keen sense of the obvious.