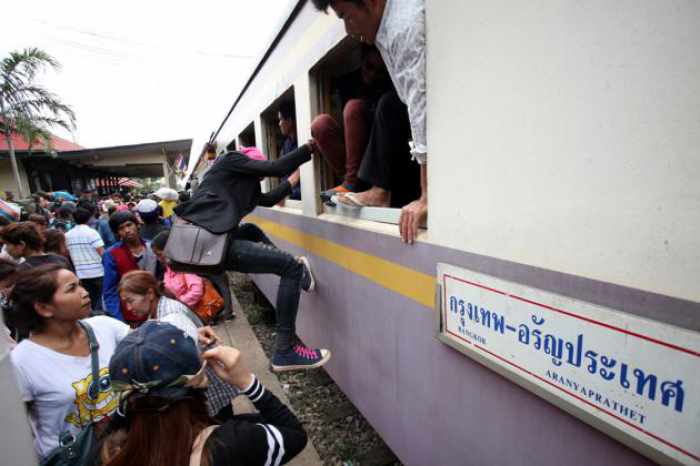 PHUKET: To stem the exodus of much-needed migrant workers, notably Cambodians, the junta and the authorities yesterday quashed rumours of a crackdown, gave another chance to their employers and vowed to uphold human rights of alien workers.

The junta’s order issued yesterday encouraged employers to register their migrant workers so authorities could regulate them and protect them from forced labour and other rights violations. Agencies must enforce the law effectively to suppress human traffickers. “Officials involved in trafficking syndicates or taking bribes from them will be punished,” it said.

Recent rumours have sent more than 100,000 migrant workers, mostly Cambodians, back to their homes. The mass exodus of low-paid workers might spell problems for the Thai economy, especially in the real estate and fisheries industries.

Sihasak Phuangketkeow, permanent secretary of the Foreign Ministry, met with Cambodian Ambassador Eat Sophea to seek ways to end the flight. Thailand has assured Cambodia that it had no policy to crack down on migrant workers and also guaranteed to protect their rights.

“I trust that the assurance [by Thailand] would be observed,” Eat Sophea told the press.

Sihasak said he had no idea where the rumours came from, but insisted that even undocumented workers would be treated in accordance with Thailand’s human rights obligations.

A hotline has been set up at the Cambodian Embassy and it was now receiving calls every two minutes seeking clarification on the rights and status of Cambodian workers in the Kingdom. “We’ve already spread the news to our workers. We have to give our assurance that this [persecution] is not happening,” she said.

Cambodian workers, particularly those with work permits, should not panic, she said. Sihasak said the Foreign Ministry and the embassy will be communicating more frequently and will work closely to allay concerns and stub out rumours.

The National Council for Peace and Order only wants to reorganise migrant workers in Thailand so they can enjoy the same protection, welfare and rights as their Thai peers and not be exploited by their employers.

Migrant workers were a vital element of the Thai economy.

“I have insisted to [the Cambodian ambassador] that the rumours are unfounded,” said Sihasak, who is acting as foreign minister under the military government.

The Labour Ministry will hand out leaflets in the Myanmar, Lao and Cambodian languages to employers to pass on to their migrant workers explaining the real situation and the foreign-labour policy of the junta, permanent secretary Jirasuk Sugandhajati said. The leaflets will reassure workers that the ministry was not indiscriminately prosecuting them.

Yongyuth Chalamwong, from the Thailand Development Research Institute, suggested that the junta grant an amnesty to employers of illegal migrants to allow them to register the workers within a few months.

Migrants from Myanmar are also panicking but have not yet left, said Sirigorn Leardchayopit of the Raksthai Foundation. Security officials are conducting searches in Samut Sakhon every night, causing Myanmar migrants to hide in temples and other places out of fear, she said.

People with health issues may be banned from driving