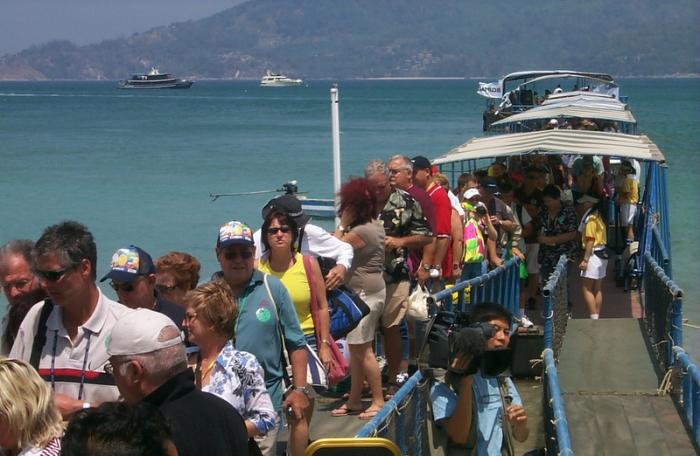 PHUKET: Up to 800,000 foreign tourists are expected to visit the country in the next two weeks, but total annual arrivals will likely miss the 30 million target predicted by the private sector.

The Tourism Authority of Thailand (TAT) expects a total of 28.8mn arrivals this year, slightly higher than the original projection of 28-28.5mn.

The country’s previous highest arrival numbers were at 26.5 million in 2013, with the figure falling to 25 million last year.

Juthaporn Rerngronasa, deputy governor for international marketing at the TAT, said a lot of the large volume of foreigners travelling to the Kingdom over the next fortnight were coming to celebrate Christmas and the New Year.

Private sector entities such as the Tourism Council of Thailand (TCT) earlier forecast the country should receive up to 30mn tourists this year due to large numbers of visitors arriving from China. The TCT is still optimistic about the situation for the remaining weeks this year despite the market facing many negative factors.

Ittirit Kinglake, president of the TCT, believes the deadly bomb blast in Bangkok in August and violence in some western countries are key factors negatively affecting inbound business.

Travel operators said many tourists would avoid travelling into Europe and the Middle East and shift their plans to Thailand.

“Travel companies in Russia have been ordered [by the Russian government] not to bring tourists into Turkey due its current conflict [with the country]. This will be good for Thailand as the Russia market should bounce back,” said a spokesperson from an inbound tourism company.

The spokesperson added that tourists from the Middle East would not travel to Russia, and Thailand had become a new choice.

Tourists and travel companies in the Middle East recently named Thailand the best holiday country in the world for 2015.

They were polled in a survey conducted by Ultratravel Middle East Magazine. Thailand beat Australia, the Maldives, South Africa and the US.

In Rome, the TAT’s office is promoting Thailand as sport destination due to the many sporting facilities in the country that are on par with international standards.

It is also promoting the fact that the county has a long list of regional and international sports tournaments taking place every year.