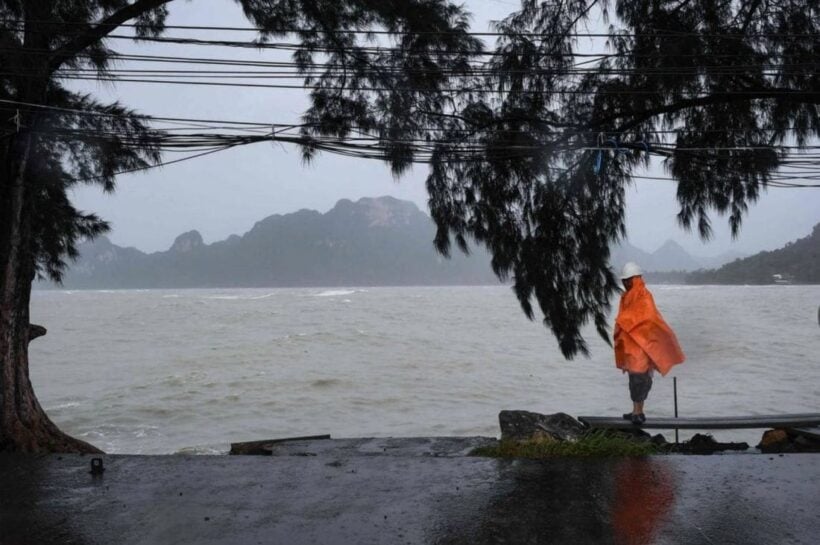 Now the actual storm has passed, a media storm is brewing over two key issues – tourists claiming they had little knowledge about the approaching storm and local tour operators, especially in the Andaman region, who say the media coverage was ‘hyped’ and overblown.

“Stranded British tourists have spoken of their anger after being allowed to travel to parts of Thailand despite warnings over Tropical Storm Pabuk.”

The Evening Standard in the UK has come out punching with quotes from disgruntled British tourists venting their dismay about the apparent lack of information about the approaching storm.

“The horrific storm has taken tourists by surprise and a lack of information has left some unsure how to remain safe.  It is bringing five-metre high waves to coastal areas along with powerful downpours, prompting evacuations from many locals and leaving one man dead so far.”

The article emerging today appears quite different from reality where the approaching storm was given a lot of media attention, locally and internationally. A few moments on your Facebook newsfeed or chatting to other travellers you would heard about Pabuk.

“Katie Preston, 23, and her partner Liam Bland, 29, are stranded on the island of Koh Phangan. They were allowed to take the last boat there before services were stopped due to fears over the storm.”

As a question of timing, if you arrived on an island just before the boats were forced to stay ashore, well, you’re stuck until further notice. This is when travel insurance comes into play. Neither the boat operators or the tourists could have been prepared for the order to stay ashore. It may have been ‘on the cards’ with the approaching storm but the timing was determined by the weather, not the officials.

In the Gulf of Thailand’s southern coastal areas the ban on boating activities was a good call with winds up to 80 kph whipping up seas to a reported 4-5 metres.

Along the Andaman coast the closure of Marine National Parks and the ban on boating activity was a precautionary measure with forecasters not sure exactly what the storm would do as it approached land. ‘Pabuk’ could have veered inland at any time. Different forecasters were publishing slightly different tracks for the storm. No one knew for sure.

On this, The Thaiger was using a US weather model which was mostly correct – a lot more accurate than some of the local weather models. Tropical storms often have a mind of their own and different models can come up with different predictions.

This was even more apparent on Saturday morning when local media were reporting the ‘eye’ of Pabuk sitting somewhere over Krabi! In fact the storm had scooted north of Krabi and was past the Phang Nga coast and heading west out to sea by Saturday morning. It was also a very weakened storm by the time it arrived on the Andaman Coast.

“The centre of tropical storm Pabuk is forecast to cross Phuket later today (Jan 5), after cross Ao Leuk in Krabi overnight.” (Their typo, not ours)

10 seconds on the local live weather radar would have shown that this was nonsense. The local weather radars were the most useful tool to locate the storm whilst it was near and crossing the southern Peninsula. Forget any forecasts, THERE is is, live.

In Phuket, it barely even rained.

With Andaman tourist locations like Krabi, Phi Phi, Phuket and Phang Nga dodging much of the angry weather, local tour operators are now crying foul about the precautionary banning of marine activities saying it’s cost them lost revenue with cancellations, and angry travellers stranded on islands waiting for the ban to be lifted.

The Government, together with local marine officials, took the correct action in curtailing the movement of tourists. They were damned if they applied the ban and damned if they didn’t.

What if Pabuk randomly started moving westward earlier than it did and bringing its high wind speeds across the Peninsula? With the ‘Phoenix’ marine disaster fresh in everyone’s memories, officials would have been keen to avoid more tragedy if the weather had turned bad in the Andaman region.

The ‘language’ used in the reporting was another problem with terms ‘storm’, ‘tropical storm’, ‘tropical depression’, ‘severe storm’, ‘typhoon’ and ‘cyclone’ all appearing in different media. As The Thaiger tried to clarify, Pabuk was never more than a Tropical Storm and definitely not a ‘typhoon’. But readers of some of these terms may not have been educated about their meanings and the differences of kilometers per hour, knots and miles per hour which were variously used to describe the storm as it crossed the Gulf of Thailand.

When tropical storm ‘Harriet’ hit the same coast back in 1962 it caused the death of 900 people. Improved infrastructure, emergency preparedness, much improved weather forecasting and some precautionary evacuations and banning of boat movements surely saved Thailand from, what could have been, a much more serious aftermath.

For the families and friends of the three people who lost their lives as a result of Pabuk, we extend our deepest condolences.