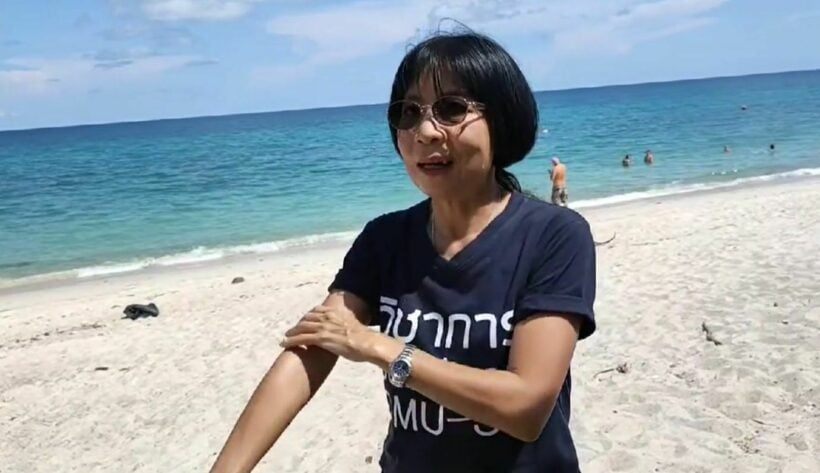 With most of the fatal box jellyfish stings in Thailand over the past decade in Koh Samui and Koh Phangan, representatives from 20 hotels attended a lecture at the Hive Hotel on Koh Samui to learn about preventing and treating stings from box jellyfish, known as one of the most venomous marine animals in the world. By providing the knowledge to hotel staff, Professor Lakkhana Thaikrua hopes tourists who come to the island can learn how to protect themselves against box jellyfish stings and feel more confident at the beach.

Professor Lakkhana Thaikrua from the Department of Medicine at Chiang Mai University gave a lecture and a first aid demonstration of how to treat box jellyfish stings yesterday at the Hive Hotel on Lamai beach. The hotel representatives can take their knowledge away and pass it on to hotel staff and tourists who come to stay, which hopefully will reduce the total number of box jellyfish stings and prevent stings that do occur from turning fatal.

The Department of Marine Coastal Resources conducted a survey of poisonous jellyfish from 2009 to the present along the Andaman Coast and the Gulf of Thailand, covering 23 provinces of Thailand. The survey found two types of fire jellyfish, one type of bottle jellyfish and six types of box jellyfish.

Hotels received warning signs in four different languages and ‘vinegar stations’ which will be installed at the beaches of every hotel. Here are the professor’s tips on how to avoid box jellyfish stings…

The professor gave a demonstration on how to help someone injured from a box jellyfish sting. If someone gets stung, this is what to do…

Faraday
As CPR has been mentioned, here's the Basic Life Support Algorithm. Source:https://www.resus.org.uk/library/2021-resuscitation-guidelines/adult-basic-life-support-guidelines

Faraday
Treatment Of Box Jelly Fish Stings. Source: https://www.webmd.com/first-aid/what-to-know-about-box-jellyfish-stings Treatment: Treatments for a Box Jellyfish Sting If a box jellyfish stings someone, take the following measures: Take the person out of the water carefully Apply vinegar to the sting for…
Grant
On 3/31/2022 at 11:54 AM, Thaiger said: With most of the fatal box jellyfish stings in Thailand over the past decade in Koh Samui and Koh Phangan, representatives from 20 hotels attended a lecture at the Hive Hotel on Koh Samui…

Pinetree
15 minutes ago, Grant said: I think 🤔 All beaches should have signs with pictures of the Dangerous jelly fish! And a warning on when they are most prevalent! Also Warning ⚠️ on what to do in case of Emergency!…
oldschooler
Yet Another Reason NOT to enter ANY Tropical Waters. Or get on ANY Tropical Boats. Way Too Many Serious Hazards for the Unwary. Swim Pool Fin Laps for me. Beach Walking Fine with Proper Shoes (Former SCUBA guy ; so…