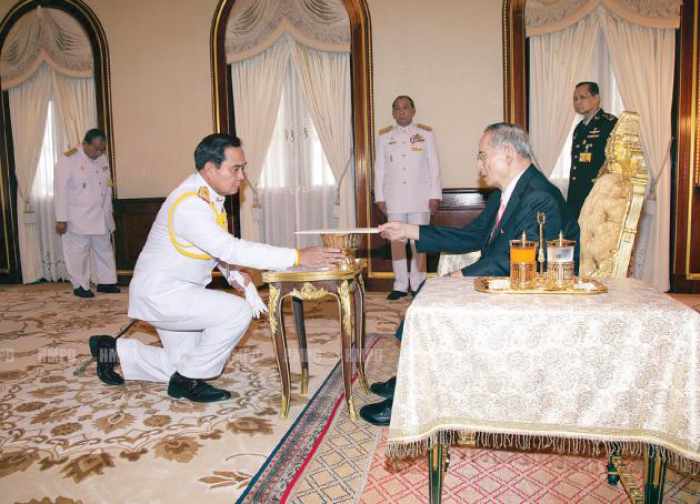 PHUKET: His Majesty The King has endorsed a provisional charter that puts the chief of National Council for Peace and Order (NCPO) in charge of national security, allowing him to suppress any action both inside and outside the Kingdom that could be considered a threat to national peace, security, economy or the monarchy.

Article 44 of the provisional Constitution stipulates that all orders from the junta chief, with the endorsement of the NCPO, on those matters are final.

The 2014 provisional Constitution, comprised of 48 Articles, stipulates that the NCPO will continue in its current status. Moreover, the junta chief or the PM can call a meeting with the NCPO and Cabinet to discuss issues related to national security. Article 48 of the provisional charter also gives the NCPO amnesty for its coup.

The charter stipulates that the 220 members of the National Legislative Assembly (NLA) would be selected by the NCPO and appointed by His Majesty.

The government would comprised of a prime minister and a 35-member Cabinet, who will be nominated by the NLA and then appointed by His Majesty.

The National Reform Council’s 250 members will be nominated by the NCPO and then appointed by His Majesty. The members will be representatives from each province and different civic groups.

Once the charter is ready, the National Reform Council and the charter drafting committee must continue to collaborate on organic laws.

Members of the NLA, the National Reform Council, the Cabinet and the Constitution drafting committee must not be political party members or political office holders over the past three years.

Meanwhile, NCPO chief General Prayuth Chan-ocha was granted an audience with His Majesty at Klai Kangwon Palace in Prachuap Khiri Khan at 5pm. He was handed the royally endorsed provisional Constitution.

This the first time that the junta chief was granted an audience with His Majesty since the military seized power two months ago.

This provisional charter is meant to kick-start the second phase of the junta’s roadmap for national reforms and reconciliation.

According to the junta’s road map, a general election would be held by October next year. The military took power on May 22 to restore order in the country after months of turmoil and political protests aimed at bringing down the elected government of former prime minister Yingluck Shinawatra.

Foreign Ministry spokesman Sek Wannamathee said the provisional charter would help convince the international community that the ruling junta would pursue its road map and complete it on schedule.

He said it was good that currently the governments of European Union countries, the United States, and Australia had shown a better understanding of the situation in Thailand.

They are now focusing on the details and the process of the road map instead of condemning the coup, he claimed.

“They [foreign communities] will keep their eyes on the NCPO’s role and power after the charter comes into effect; who will be appointed as prime minister and the composition of the cabinet,” he said.

It is the ministry’s duty to assure them that Thailand would follow the road map back to democracy, he said.

Moreover, the ministry will ensure that after national reforms, Thailand will maintain diplomatic relations with other countries and try to enhance the Kingdom’s role in cooperation with international communities.

Boy, 4, dies after being left in car by school driver