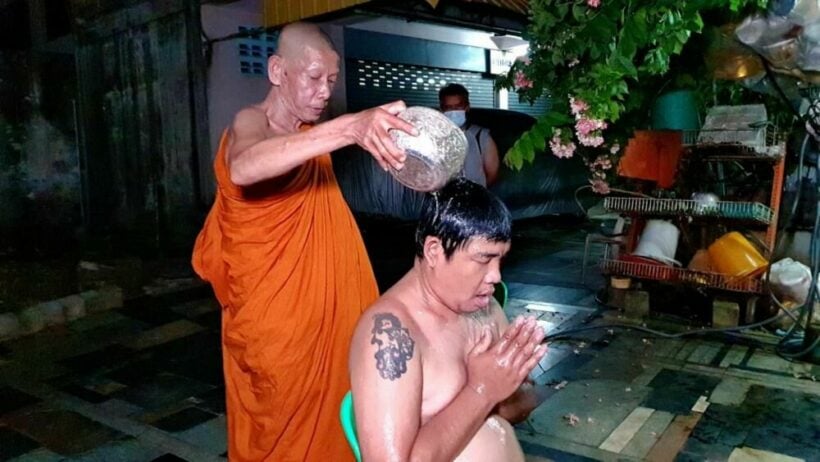 A Thai man from Chon Buri province claims a vengeful spirit possessed his body and forced him to attempt suicide on two occasions. A Buddhist monk reportedly communicated with the spirit in the early hours of this morning and, apparently, the ghost wants the man to rectify a crime he committed 19 years ago… by repaying 20,000 baht and ordaining as a monk.

According to ThaiRath, the ghost told the monk that when the man was a forest ranger, he had stolen 70,000 baht from a wooden spirit house before destroying it. The man reportedly confirmed he committed the crime and is now trying to meet the ghost’s requirements, in order to escape its apparently powerful grip over him.

Since April 14, 40 year old Teerayut Naesuk claims that an unforgiving spirit has been making life hell for him and his family, who live in Sattahip district in Chon Buri province in eastern Thailand. Teerayut says the spirit has possessed his body and made him try to hang himself on two occasions, only to be saved by his family in the nick of time.

Teerayut took his family to Thep Prasat Temple in Chonburi to get help from a monk named Ajahn Eid. In the early hours of this morning, Ajahn Eid conducted an ‘exocism’ using holy water to attempt to free Teerayut from the shackles of the spirit. During the ceremony, the spirit possessed Teerayut’s body once more, giving the monk the opportunity to communicate with it.

The spirit explained to the monk (in magic spirit thoughts) that he was seeking revenge on Teerayut and his family because the man destroyed the ghost’s wooden spirit house 19 years ago. Teerayut found 70,000 baht in a cloth bag inside the spirit house and took it, then smashed the spirit house in the hope there was more money hidden inside it. Teerayut confirmed he did commit the crime, which the monk said is a very serious offence.

The ghost says it will spare the lives of Teerayut and his loved one if he becomes a monk and repays 20,000 baht by tomorrow, April 20. If Teerayut doesn’t do as the spirit says, it will make Teerayut crazy and claim the lives of everyone in his family, according to the monk. The spirit told the monk that Teerayut has already repaid the equivalent of 50,000 baht in good deeds he has done over the past 19 years.

Teerayut is worried he won’t be able to meet the spirit’s requirements by tomorrow, so the monk requested that the ghost extend the deadline until the end of the month. The monk didn’t explain how Teerayut should go about transferring the money into the ghost realm.

The man will ordain as a monk in his wife’s hometown in Wang Hin District in Srisaket province in an effort to cleanse his karma and finally escape the bonds of the spirit, which finally possessed Teerayut 19 years after he destroyed its home.

AdvocatusDiaboli
22 hours ago, Thaiger said: A Buddhist monk communicated with the spirit in the early hours of this morning and apparently the ghost wants the man to rectify a crime he committed maybe this monk wants to join the Portuguese…
Wackamole
11 hours ago, ShibaBud said: Obviously you know nothing about Christianity. May God open your spiritual eyes for the shedding of Jesus' blood to redeem your soul, as an Easter blessing to you. There are things greater than the naked…

palooka
Been to one of these exorcisms. Young woman's boyfriend would wake in the middle of the night to find his girlfriend huddled in the shower speaking with a young girls voice saying " I just want to go home". At…

Bluesofa
My personal experience was about thirty years ago. I turned up with my very first Thai girlfriend to 'watch a monk praying at a big house' in Bangkok. The reality of it was something different. There were about twenty people.…
Mazz11
22 hours ago, HiuMak said: He will have to burn the 20K baht to have it receive in underworld🤣 Somehow I think an alternative method will be used to make the money disappear.