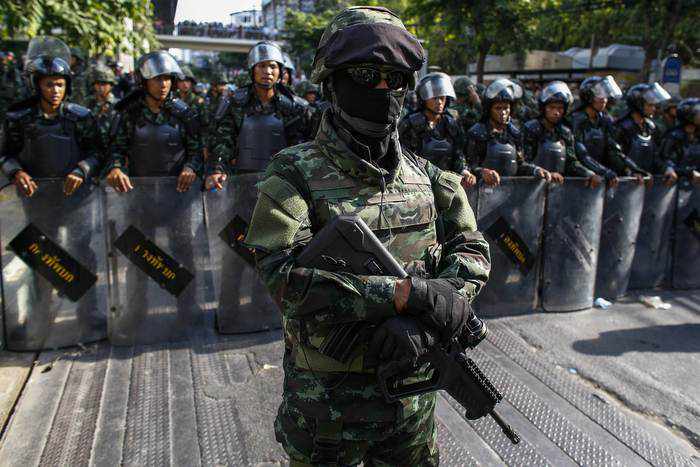 PHUKET: National Council for Peace and Order (NCPO) leader Gen Prayuth Chan-ocha said yesterday that a process of reconciliation between political factions and reforms would take about one year, and only after that would a general election be held.

Gen Prayuth, who overthrew the government on Thursday last week, said all sides had to cooperate and stop protesting for his plan for the restoration of democracy to succeed.

“Thailand and the Thai people are facing many problems that require immediate attention and solutions,” Gen Prayuth said in a televised address.

“Enough time has been wasted on conflict.”

Gen Prayuth outlined a three-phase process beginning with reconciliation which he said would take up to three months. A temporary constitution would be drawn up and an interim prime minister and cabinet chosen in a second phase, he said.

“This process will take approximately a year, depending on the situation,” he said. “The third phase will be democratic elections.”

“All that I have outlined will not succeed if all sides do not cease demonstrating politically,” he said.

The government clung to power even after a court forced Ms Yingluck out of office for abuse of power on May 7, but the military ousted it in a coup on May 22, saying a takeover was necessary to restore order and prevent further violence.

“We cannot keep fighting each other just because we think differently,” said Gen Prayuth.

“Every side must find a way to cooperate.”

Thailand has become polarised between supporters of Yingluck and her influential brother, deposed premier Thaksin Shinawatra, and the PDRC.

Mr Thaksin’s popularity among poorer voters, especially in the populous, rural northeast and north, has ensured that he or his allies have won every election since 2001.

A stumbling economy is the priority for the military and Gen Prayuth promised that the 2015 budget would be in order and public spending would be transparent.

Figures out earlier on Friday showed private investment and consumption were stagnant in the run-up to the coup.

Gross domestic product shrank 2.1 per cent in the first quarter of 2014 as the anti-government protests damaged confidence and scared off tourists.

With only caretaker status after dissolving parliament in December for a February election that was later annulled, Ms Yingluck’s besieged government had lacked the power to take policy decisions or approve new spending.

A senior central bank official, Mathee Supapongse, said that under the military government, which is paying farmers money owed them under a failed rice-subsidy scheme and eyeing infrastructure spending, “the overall picture looks better, but it’s not easy to get to the central bank’s economic growth forecast of 2.7 percent”.

“It’s been half a year now and stimulus measures will not come all at once, but gradually, so the effect will rather be felt next year,” said Mathee, head of the bank’s macroeconomics department.

He was speaking after the release of central bank data that showed private investment in April, the first month of the second quarter, was 4.7 percent lower than in the same month last year and consumption was down 0.8 percent.

It followed data on Wednesday that showed factory output fell for the 13th straight month in April, imports plunged and exports remained weak, underscoring the difficulty the military government faces in averting recession.

The U.S. and other foreign governments have condemned the coup and called for a rapid return to democracy. The Australian government on Saturday reduced military ties with Thailand and banned coup leaders from travelling to Australia.

Prayuth made a direct appeal for patience from Thailand’s international friends in his address.

“All we are asking for is give us time to reform in order to mend our democratic system, to make it right, just and responsible,” he said.

Despite martial law and the ban on gatherings, small peaceful protests against the coup have been held on an almost daily basis in Bangkok.

For a second day on Friday, soldiers mounted a big operation at the central Victory Monument, where sometimes rowdy crowds had faced off with soldiers and police earlier in the week, sealing it off and preventing anyone from gathering.

Activists, spreading word through social media, say they will hold a big show of opposition at the weekend.