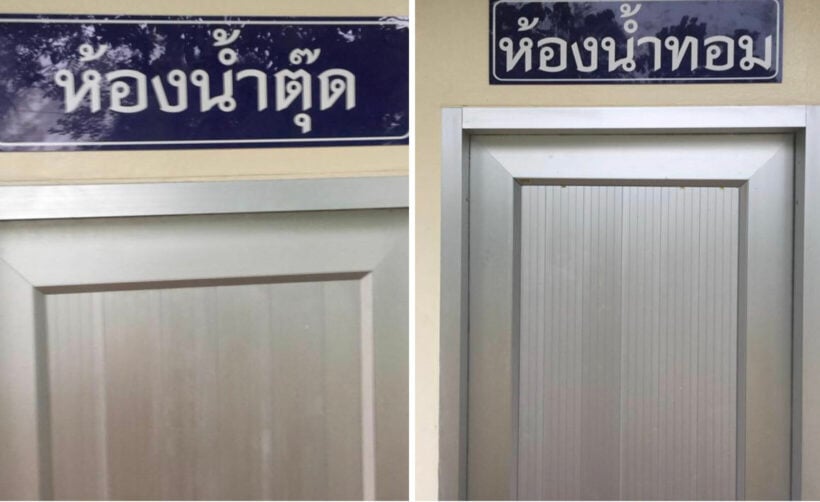 One Thai temple trying to be a bit more progressive missed the mark when it comes to gender neutral restrooms. Instead, they designated restrooms for gay men and lesbian women.

A picture of toilet sign saying ห้องน้ำตุ๊ด which means “Gay Toilet”’ and ห้องน้ำทอม which means “Tomboy Toilet” went viral among Thai netizens. The sign and toilet are located at Sarikaram Temple in Trang province.

The monk had good intentions. He said that the temple welcomes people of all gender identities and he wants them to feel comfortable, and not confused, when choosing which toilet to go to.

The monk also added that it has been six years since the toilets were built, and there are many LGBTQ+ visitors using them. Some have even gathered and come back supporting the temple by cleaning or doing other community service as they saw that the temple supported them. Thai netizens comment in a fun and positive way, saying that at least this is a good start.

RampantRabbit
5 hours ago, Bluesofa said: I think you've got the short straw for that one. l heard there was a dwarf shortage

RampantRabbit
1 hour ago, Stonker said: It's not about "genders", but sexual preference. Different concepts and issues. 'Q' is 'questioning', for those who are 'questioning' their preference and haven't been put / put themselves in any particular compartment yet. wheres the…
Stonker
1 hour ago, Saltire said: Agree, but these alternate sexual preferences apply to less than 1% of the worlds population ..... "less than 1 %" ? Most informed / studied estimates put it at around 7%, but that's really only…
Saltire
37 minutes ago, Stonker said: It's simply how you're born, like being left or right-handed, black or white, tall or short. Sorry, agree, my poor choice of words.
Rookiescot
4 hours ago, DiJoDavO said: How are you so sure you're the only one? Maybe I identify myself like that too. Ok then we are going to need a bigger toilet.