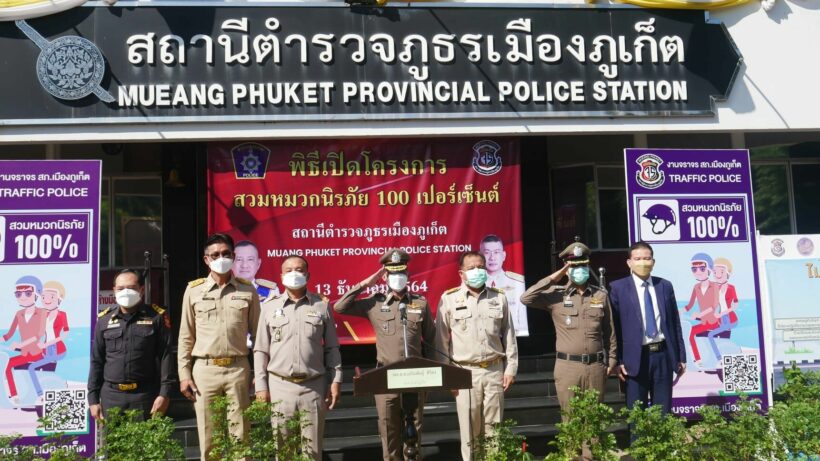 Strap on your helmet. Motorbike drivers in Phuket are warned to wear helmets while driving. The Phuket Provincial Police have launched a new campaign called “100% helmet” with increasing fines for those who are repeatedly caught not wearing one.

At the launch event yesterday, Phuket Provincial Police Deputy Commander Lt Col Sathit Nurit said that “this will help prevent and reduce severe accidents that will affect life and body as well as raise awareness of motorcycle users to respect traffic laws.”

From February 1 to March 31, offenders will be fined 200 baht for each time they are caught, and from April 1 to May 31 next year, fines will increase to 300 baht. From June 1, 2022 onwards, offenders will be fined at the highest rate required by law, which is 500 baht. Later, the drivers will also be charged if their passengers are not wearing helmets.

At the same time, Deputy Interior Minister, Nipon Boonyamanee, chaired a meeting on the road safety campaign to be held in Phuket for the New Year holidays. Vice Governor Amnuay Pinsuwan explained that the campaign will cover three main areas of road safety to be implemented by local officials, which include the wearing of helmets, speeding and drunk driving, and inspecting vehicles and roads that pose a risk of accidents.

The same scale of fines was also notified to the bikers in Patong by Region 8 Police Commander Lt Gen Amphol. According to the national Thai Road Safety Council, 66 people have died and 12,212 have been injured in traffic accidents in Phuket so far this year.

gazmo16
Knowing how people like to push the rules maybe they need to specify its not only worn but securely fastened, but then again that could be another fine I guess.
oldschooler
15 hours ago, BigHewer said: Spot on. There are laws and there are laws. And if a law isn’t enforced, it doesn’t exist. They’ve obviously decided it’s time to make this one exist. “Culture” is the only “law” here. There…
DiJoDavO
Pff, lucky that they reminded me. I just wanted to use 73% of my helmet.

Lowseasonlover
Go and stand outside the schools, sorry the police already there

AlexPTY
Another "we enforce the law" campaign by the law enforcement

How to bring your pet into Thailand