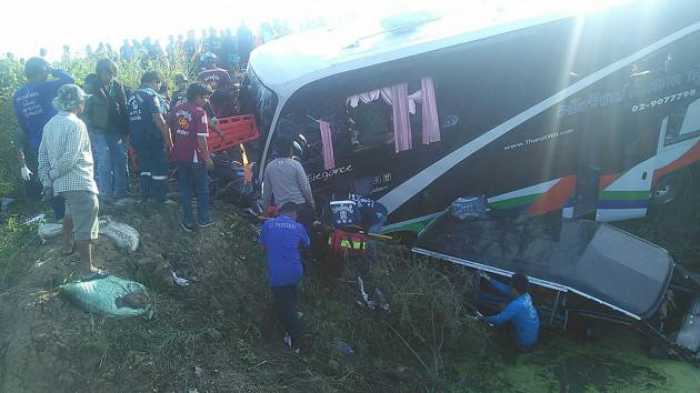 PHUKET: The Bangkok Metropolitan Administration (BMA) yesterday confirmed that it would take care of officials who were injured in a road accident yesterday in Ayutthaya’s Bang Pahan district.

The crash of a chartered bus, carrying dozens of BMA Budget Office members of staff, and a pickup truck on Highway 347 resulted in four deaths and 47 injuries. The bus was the last one in a three-bus BMA caravan on a trip to a seminar in Chiang Mai province.

Witnesses told police that the truck cut in front of the bus to make a left turn, resulting in the bus crashing into the truck’s rear.

Bangkok Governor MR Sukhumbhand Paribatra visited the injured at Phra Nakhon Sri Ayutthaya Hospital, saying they would be provided with full financial support and later moved to a BMA hospital.

In related news, a Bangkok-Trang train yesterday morning rammed into a Honda sedan at a railway crossing in Nakhon Si Thammarat’s Thung Song district, resulting in an explosion and fire, and killing all four people inside the car.

Police said the three men and one woman in the car had been heading from Songkhla to attend a funeral in Krabi province, but the driver was not familiar with the route and the railway crossing had no barrier.

The crash and subsequent clearing caused the railway line to be closed for two hours.