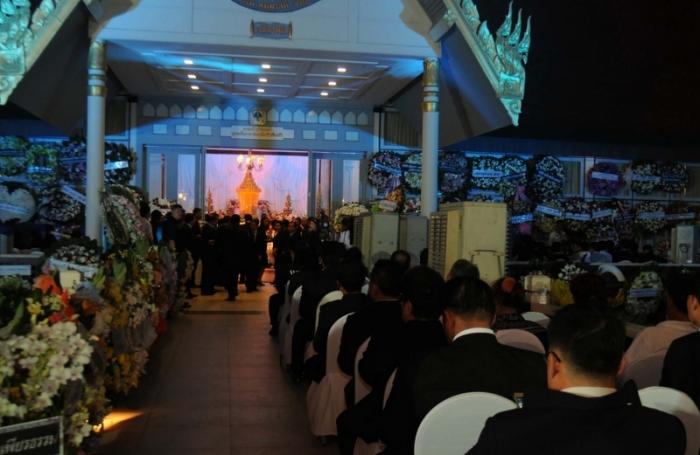 The Chart Thai Pattana patriarch passed away peacefully in the early hours yesterday, after two days of treatment at Siriraj Hospital.

Mr Banharn was born on August 19, 1932 in Suphan Buri Province as the fourth of six children of a merchant with Chinese ancestry. His family sold goods at a local market.

The late veteran politician graduated from Prateep Wittayalai School in his home province and continued his education in Bangkok, pursuing a diploma degree at Bangkok Business College while at the same time working with his brother in a construction business.

Mr Banharn made a fortune in trade and construction, including being a chlorine distributor for the Provincial Waterworks Authority.

He started his political career in 1974, following the recommendation of Boon-ua Prasertsuwan in the early days of the Chart Thai Party, and was appointed a member of the then-National Legislative Assembly and the Senate the following year.

He also served in the important role of deputy industry minister since his first term as a member of House of Representatives, earning several nicknames based on his ethnicity and his influence, such as ‘Suphan Buri’s Dragon’.

Mr Banharn served as a minister and deputy minister under multiple administrations during the first twenty years of his political career from the late 1970s, while his position in the Chart Thai Party was simultaneously advancing equally.

His political career reached its peak in 1995 when Chart Thai won the majority vote in Parliament and was the leading party to form a coalition government. Mr Banharn, as the party’s secretary general, stepped up and became the 21st prime minister of Thailand.

However, his administration was barely in power for a year and a half, when it lost due to a vote of no confidence in November 1996, after being accused of inefficiency.

The then-opposition led by the Democrat Party also claimed Mr Banharn’s birth certificate showed that he did not hold Thai nationality and was thus disqualified to be prime minister. Other coalition government parties consequently called on him to resign, leading to him deciding to dissolve Parliament.

The legacy of the Banharn administration is the constitutional amendment that led to the setting up of the Constitution Drafting Assembly, which wrote the 1997 Constitution – deemed by many as one of the most democratic charters the country has had. Thus, it could be said that the political reform push was initiated under his government.

After his stint as prime minister, Mr Banharn did not serve as a minister again during his later political career. However, he continued to run in elections to represent his stronghold Suphan Buri and won every one of them.

The last time he was elected as a representative was in 2007, when he recorded the highest vote of any constituency in the country.

He married Jamsai Silpa-archa in 1962 and the couple had three children; Kanchana, Parichart and Warawut.

Credited for Suphan Buri’s impressive growth, many schools and other facilities in the province have been named after him and his wife, such as Banharn-Jamsai School and Banharn-Jamsai Tower.