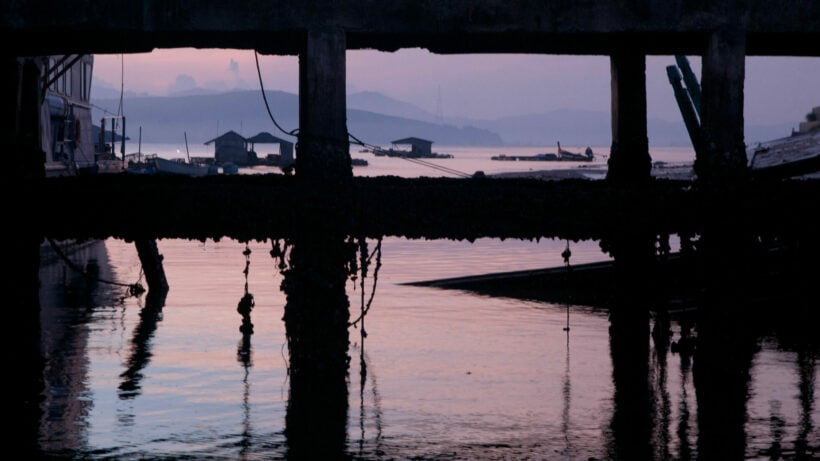 A former Phuket tour guide, who was previously denied entry onto the island, is believed to have drowned after he slipped and fell into the water next to the Sarasin Bridge, yesterday. Police were called to the scene at half-past 2. Then, police and rescue workers attempted to save the former tour guide, 42 year old Sutep Sae Man.

By the time rescue workers arrive at the scene, a crowd had already formed on the bridge.

One eye-witness, 52 year old Niaw Sae-ong says she was fishing off the bridge when Sutep sat down near her and enjoyed some snacks. Sutep then asked Niaw for some water and struck up a conversation.

Niaw says Sutep told her how he came to Phuket Gateway to run an errand but was denied entry due to his Chiang Mai address on his ID card. Sutep also said he was full vaccinated. Niaw says after they talked, she walked away and continued to fish. Niaw adds that she watched Sutep “do something” before slipping and falling into the water.

She says she twice yelled out for help but had to ask others to assist Sutep because she cannot swim. Despite her calls for help, Niaw was reduced to watching the man slowly sink under the water. When rescue workers got to the bridge, Sutep was no longer visible.

Sutep’s stepdaughter, 18 year old Pantita Piyachan, also went to the scene. She says her stepfather had left their home about 10 am, yesterday. Then, in the afternoon, a police officer called her mother to tell her what happened and asked for someone to come. Painita says her mother was in shock at the Tha Chatchai Police Station and that she hopes they find her stepfather’s body soon.

Rescue divers searched for Sutep throughout the afternoon but had to stop when the lack of light made their search too perilous. Officals plan to keep searching until they find his body. Bobalong
12 minutes ago, Thaiger said: A former Phuket tour guide, who was previously denied entry onto the island, is believed to have drowned after he slipped and fell into the water next to the Sarasin Bridge, yesterday. Police were called…

Shark
RIP. May your body be found and returned to your family.