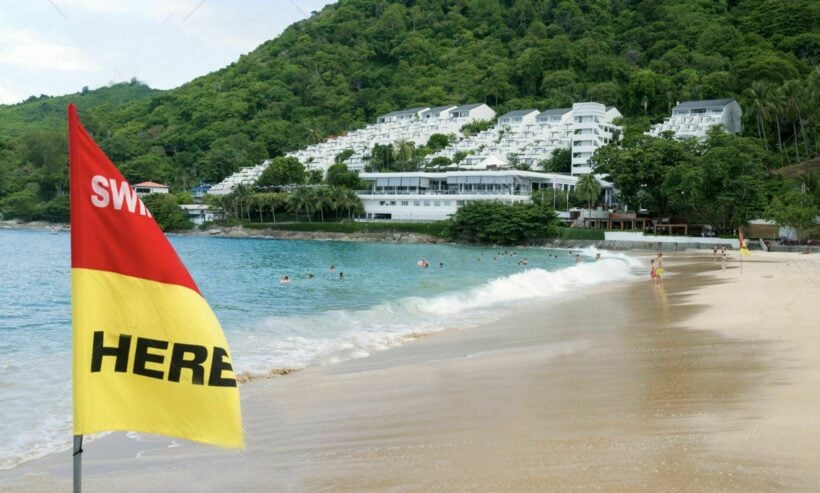 Phuket lifeguards are urging beachgoers on the southern island to be “careful when doing water activities and swim only in the areas marked as safe” as well as to “follow lifeguards’ suggestions” after a 6 year old girl and a Russian man were plucked from the water after getting into difficulty in 1 day.

The Nai Harn beach chief lifeguard says he rushed to the popular beach, at the southern end of the island, around noon yesterday, when he was alerted to a young swimmer needing assistance. He arrived to discover a 6 year old girl who had just been brought out of the water. She was choking on water and exhausted. The lifeguard team provided immediate first aid before rushing her to hospital. The girl is now in a stable condition and expected to fully recover.

About 4 hours later, the lifeguards were called again to help a Russian man at Ya Nui beach, the next beach south of Yai Larn, not far from Promthep Cape. The man had been swimming with his 2 friends and became separated from the other 2. About 200 metres from the shore, the man started shouting and signalling for help. He was eventually rescued by a lifeguard but was already underwater and unconscious when the guard reached him. He was also rushed to hospital but has since regained consciousness.

Nah Harn’s chief lifeguard also warned parents to keep an eye on their children when they go swimming or doing other water activities.

“Although the waves are not high now, unexpected incidence can happen.”

Phuket aims to vaccinate 70% of population, re-open to foreign tourists by October