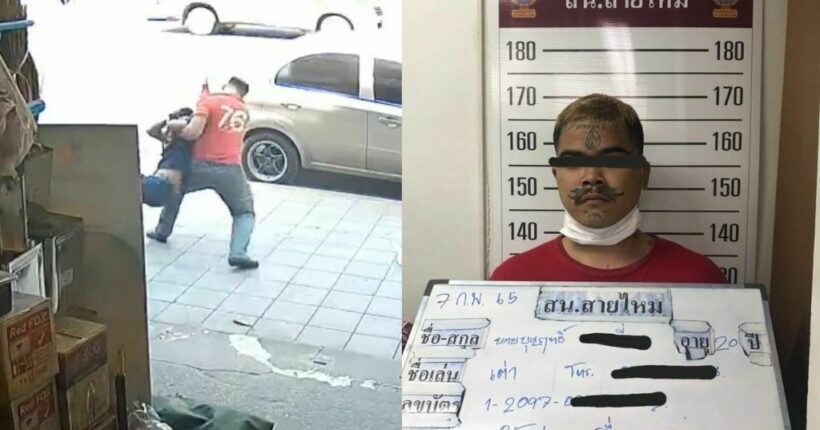 A food delivery driver riding his motorbike on the sidewalk nearly hit a man walking out of a shop. The pedestrian says he yelled and the driver then got off his bike and attacked the man on the sidewalk, video footage shows.

Thai media identified the man as Boonrit, or “Tao Titan Face” for his face tattoos that resemble a demon, later surrendered to police. Reports say he apologised in front of reporters, saying he would never do like this again and would be a better person.

A video of the incident went viral on Facebook yesterday after the 26 year old pedestrian asked Thais to help find the man who attacked him. He said that he went to buy electronic equipment and was walking out of the shop when a motorbike driving on the sidewalk grazed by him. He yelled at the rider, who then walked over and attacked him.

The man was wearing a yellow Robinhood jacket and the food delivery company later came out with a statement saying the man doesn’t work for them and has never registered to be a delivery driver. The man apparently borrowed the jacket from a friend, whose account with Robinhood is now dismissed. The company also shared that they would like to offer compensation to the victim.

DiJoDavO
8 hours ago, vlad said: Will he also be fined for not wearing a helmet. His eyebrows look big enough to protect him during any accident.
koute
15 hours ago, Saunk said: Guess you've never been to Saigon. Completely normal there for people on motorbikes to drive on sidewalks. During rush hour the sidewalks become streets and obviously very dangerous for pedestrians. lol mate you cant…
HiuMak
The world has gone mad

nobusinessofurs
14 hours ago, Travisa said: A total moron. Not stopping at crosswalks, driving down a sidewalk, etc., etc., etc. As a pedestrian, you need more eyes than when you’re driving. You have 0 protection against morons like this. …
Travisa
11 hours ago, Saunk said: Guess you've never been to Saigon. Completely normal there for people on motorbikes to drive on sidewalks. During rush hour the sidewalks become streets and obviously very dangerous for pedestrians. I have. I’m guessing you’re…

Police search for bank robber who stole more than 200,000 baht in cash