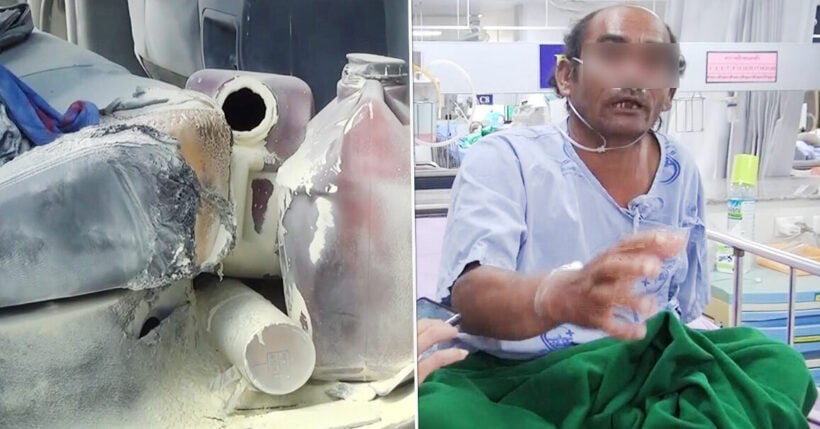 A farmer from Buriram province in northeast Thailand put five gallons of gasoline in his truck, set it on fire with fireworks, and drove it into Buriram Legal Execution Office yesterday. He says his wife’s land was wrongfully seized and sold at auction and no one will help him get justice.

At around 11am, 58 year old Manop from Phutthaisong district set his pickup truck on fire and crashed it into the gate of the Buriram Legal Execution Office. He had two buckets of gasoline in the back seat and three buckets in the bed of the truck.

An eyewitness, 55 year old Somkiat, said he was waiting for his sister outside the office when he saw the pickup truck drive into the steel gates of the office. He said he heard two explosions before a fire erupted in the back seat of the truck behind the driver’s seat.

Manop lost consciousness from inhaling smoke and also suffered burns on his body but is currently recovering in hospital.

The farmer claims that the Bank for Agriculture and Agricultural Cooperatives (BAAC) seized six rai land under his wife’s name and he doesn’t know why. Manop said he has always farmed on the land.

One day, Manop was visited by government officials and lawyers who said they would help him to get his land back but it would cost 300,000 baht. Manop said he gave them the money but then he was told his wife’s land had already been sold at auction. Manop said his 300,000 baht was never returned.

Manop said that he inherited some land after his parents died. However, his sister wouldn’t share the land among his six siblings so they filed a lawsuit against her. Manop had to borrow money to pay for the lawyers. He said he sold his rice mill, and pigs and remortgaged his house to pay for the legal fees.

The farmer said he was also scammed by a secondhand car dealer. He bought a car on finance for 600,000 baht and paid 30,000 baht extra to be insured. However, he later found that the car dealer had taken his money but not actually insured the car. After a few months, his car started to have problems. The oil tank leaked and the door wouldn’t close properly, so he returned it to the car dealer.

Despite having paid five months of instalments already, the car dealer demanded another 70,000 baht from Manop. He said his daughter paid the fee, who has sadly since passed away.

Manop said that after everything, he has accumulated 3 million baht in debt and has nothing to show for it.

Yesterday, Manop attended the court for a hearing in the land inheritance case involving his siblings. His lawyer didn’t show up which is when he got stressed and went to buy five gallons of gasoline and fireworks and set his truck on fire with him inside it.

Police from Buriram Police Station said Manop will be prosecuted for “damaging government property and setting fire to property.”

From a hospital bed, the farmer told reporters that he did not intend to harm property but drove the truck into Buriram Legal Execution Office out of desperation because he just wants someone to listen to him.

riclag
The intellectual way to go about solving issues! Lawyer up Pu chai!
HolyCowCm
Looks like everyone raped this guy through the crook corruption grinder. I actually feel sorry for him.

How to combat mould in humid climates like Thailand