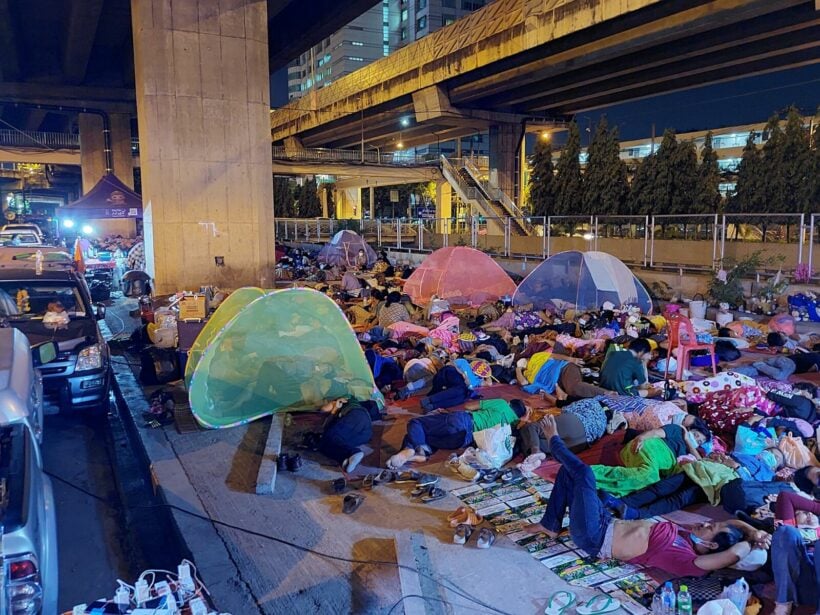 The farmers request that their debt be transferred from central government banks, which charge high interest rates, to the Farmers’ Rehabilitation and Development Fund, which does not charge interest. The fund’s committee passed a resolution approving the transfer of farmer’s debt over ten months ago in April 2021, but progress is yet to be made on the government’s side.

The problem of farmers’ debt

The fund indicated that 50,621 farmers are under debt restructuring from four government banks, with debt totalling more than 9.282 billion baht, of which more than 6.813 billion baht is from interest.

Charin, a rice farmer from Chachoengsao province east of Bangkok, has been farming on the same 50 rai of land his whole life. He borrowed 1.5 million baht in farming loans and his interest calculates to around 100,000 baht per year. Charin explained that most years, he actually makes a loss because of his debt repayments. But if he stops farming, the bank will consider him a debtor with no income, which risks his land being confiscated.

“If our debt is with the banks, the interest rate goes up every day. But if the debt lies with the fund, the interest will stop immediately. Without interest, we won’t have to worry because our land will not be confiscated or sold. Once we have paid our instalments in full, the land will be returned to us. This is our only chance at survival.”

The fund’s committee, established under the Rehabilitation and Development Fund Farmers Act 1999, passed a resolution approving the transfer of farmer’s debt from state banks to their fund which they submitted to the Ministry of Finance in April 2021. The resolution is yet to be presented to the cabinet. The debts will be repaid in instalments without interest.

The fund will accept transfers of farmers’ debt from four state banks: Bank for Agriculture and Cooperatives, Government Housing Bank, the Government Savings Bank and the Small and Medium Enterprise Development Bank of Thailand.

A group of farmers from 36 provinces who call themselves “The Farmer’s Debt Network of Thailand” gathered beneath the Rama 6 Expressway in the hope of accelerating the transfer of farmers’ debts from state banks to the Farmers’ Rehabilitation and Development Fund, who proposed the idea to the government in April 2021. In the following days, the farmers took their protest to the Budget Bureau, Bureau of Fiscal Economy, Ministry of Agriculture and National Economic and Social Development Council.

Farmers met with the Ministry of Agriculture Chalermchai Sri-On. Following the discussion, a group was set up to monitor the performance of the Farmers’ Rehabilitation and Development Fund.

Chalermchai sent the matter to a Deputy Prime Minister.

Farmers walked to the Government House to confront the Deputy Prime Minister to receive the answer, “the Deputy has travelled abroad and will return March 12 2022”.

Farmers presented the change.org petition, signed by 31,629 people, to the government through Chaiyot Chiramentakorn, Deputy Secretary General to the Prime Minister for Political Affairs. After receiving the letter, Chaiyot said the case of debt transfer to the fund had been discussed in a meeting and is expected to be presented to the cabinet by March 22.

If the Farmers’ Rehabilitation and Development Fund’s proposal gets presented to the cabinet by March 22, the 42 nights the farmers spent sleeping on the streets will be considered successful and will be a step in the right direction toward solving the problem of farmers’ debt in Thailand.

PapayaBokBok
getting sleep in this heat????