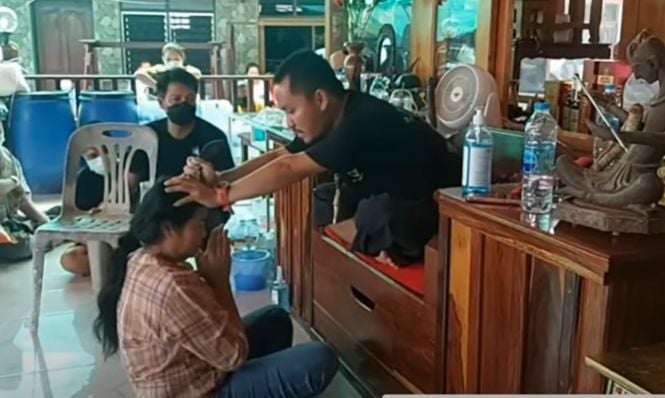 A woman who claims she had “black magic in her private parts” for 25 years finally had the evil spirit expelled by exorcists in central Thailand’s Ratchaburi. A somewhat disturbing clip circulating online displays an exorcism for a woman who claimed that her vagina had been possessed by an evil spirit for 25 years. She described the spirit’s presence as “torture.”

The exorcist, known as Ajahn Koongawee Seesayam, and his student pressed a “ghost chasing baton” on the woman’s stomach and repeatedly pressed on her vagina – while she was fully clothed – in an effort to expel the spirit.

The exorcists can be heard chanting the Pali spell “Wessawa Putsa.. Wessawa Putsa…” in an attempt to oust the black magic from her body. Ajahn Koongawee’s student can be heard telling the spirit to “get out! get out!”, but the stubborn spirit didn’t seem to want to leave.

The exorcist put his hand on his student’s head, as if to channel more power through him, and can be heard telling his student to press harder on the lady’s private parts. After what looked like a painful 14 minutes, the bad spirit finally left the woman’s lady parts.

Netizens as questioning whether exorcism is a form of sexual harassment. However, the exorcist and woman confirmed they both consented to the ceremony, and the woman can be heard thanking the exorcists for helping her.

The woman previously lived in Denmark but said the medical help she sought there didn’t get rid of the torturous spirit. Desperate for help, she travelled to Ratchaburi, Thailand to have the spirit successfully driven out by the exorcists.

Stardust
4 hours ago, HolyCowCm said: At least they did not try to suck anything out of it like a leach or waht you do with a snake bite. After reading your post, I had to think how she screems to…
Stardust
What this article not explains how this evil spirit comes into the womens private part.

PapayaBokBok
And THIS is why I decided to end my relationship with her.. She was always blaming the Devil Inside to avoid romance with me... INXS wrote a song about it
HiuMak
I am in the wrong job....
HolyCowCm
12 hours ago, Stardust said: After reading your post, I had to think how she screems to the exorcist, suck it out suck it out.. If you have ever seen Scary movie, this is the most hilarious spoof on that…

Homemade bomb explodes on Rayong road, 8 other bombs being defused