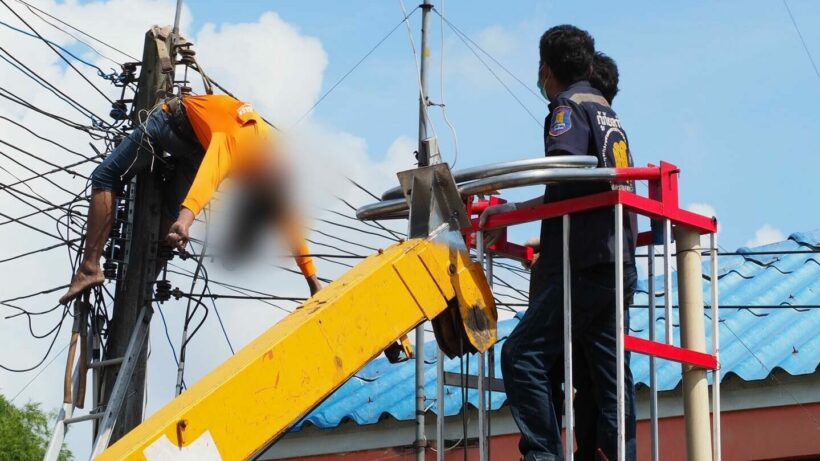 An electrician has been electrocuted to death while he was installing wires for a customer in Chon Buri, a province that sits on the Gulf of Thailand. First responders got to the scene to discover 47 year old Montri Somboon’s body still connected to a power pole close to the house. Rescue workers removed Montri’s body; it took them about an hour to extract his body from the pole.

Thai media says a burn mark was found on Montri’s stomach. The electrician was not wearing safety equipment like a helmet and gloves. Nor was he wearing shoes. An eyewitness to the incident, 45 year old Phonchai Witayapraparat says he was inside his house, relaxing when he heard a man crying for help. “I rushed outside and saw the man being shocked. I removed a wire from the transformer to cut the electric current before calling for help”, says Phonchai. 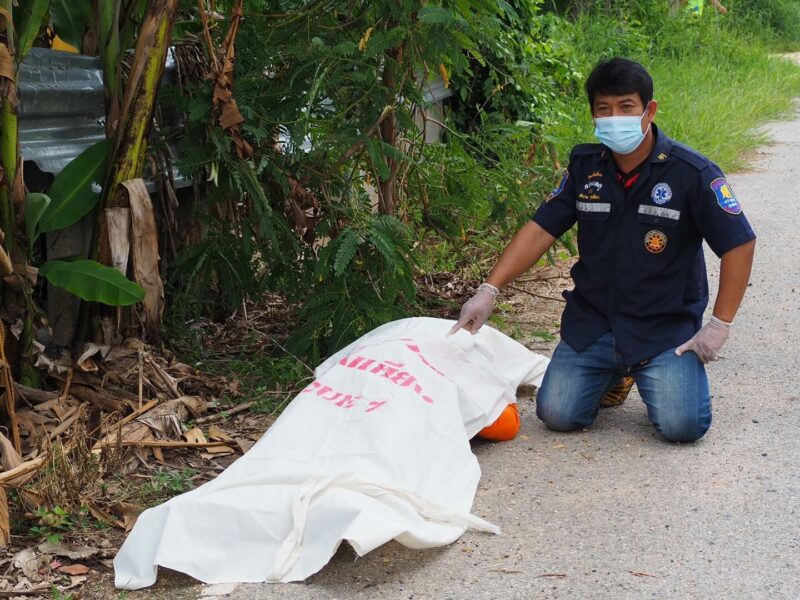 The electrician’s employer, 52 year old Naruesirn Dokmaiklee, says he had warned Montri numerous times about wearing proper safety equipment. He adds that Montri would often try to do work outside of his capabilities. Naruesirn speculates that this is what led to Montri’s death. Specifically, Naruesirn says Montri tried to connect wires that he wasn’t properly trained to handle.

gummy
5 minutes ago, thai3 said: Any Thai with a screwdriver is an 'electrician' ours when putting the shower in and told to make sure it was earthed said- what does that mean. 🤪 We are still alive. Earth to a…

KaptainRob
I rewired the MIL house.  Not a big job as only one 60 amp ceramic fuse, 11 x 40 year old fluro fittings (crumbling) and 4 ceiling fans, 2 not working!  T The old fluro end fittings, crumbling away or burnt,…

Bluesofa
1 hour ago, KaptainRob said: I rewired the MIL house.  Not a big job as only one 60 amp ceramic fuse, 11 x 40 year old fluro fittings (crumbling) and 4 ceiling fans, 2 not working!  T The old fluro end…

Shark
2 hours ago, KaptainRob said: https://lh3.googleusercontent.com/B3rFsW__T94GQpiId9nbeI7BqT-gya-g-50RfPaFb69c4whsj88-eHChKQUs2E2FOKW59mv952_KX0uOjdzT-q7O16JRwj_fmnrxrd65YL7VrpDcLnE8Rq8k5hLFRIIXquI4YpsH7cHkq2IT6dyeuwp7RFIPT-d2cKY6R79YViJqFURJ0I8XR93riRS_MvR9WefGLu0nGnp8u4aycexlTSJOPCHDrkzoS0HoQE9C4XdUQURb9PaY0pFbi_VS9N5ijW9nP92BnN_FzsgFAtqYuwPAm3vXw0c3bi2Rb0_nnYX5c6KEKA_ivBrhRs4R5JfCiWDkeY8nAh7THFODcjOQqmBfwCB5y9KzPPXdyfiwH6QDkwPfAjY5-gfoxrk5os4hbYWEWdivsN9Ji5VkfDWLI7kQDcSQDRtl6Tw_4O24ryTkTS0nSorUy4htjgBCNmj0t5LykfKj7qUOtKFGBdu9rKcMW92FJFSDc3qxdPL2eUOujK8c8ZyQDenyoTTLZ7D9C0NLemB4ot5DaRLe62WiioVp00IS1vO0TL4aIM413dfbS20ba0HZpnX3IhD3VlW9liNcLhNz45p7J2lb9Qe8aVr6rBUMZLV8a9IANMVpJ_FAbAGggN_3L9SWJ6QWoP2nogC7n-iEsHJ34XMOHC8IBm8wYhoworGtC5QOhSrmp46K-Hh2bFH894U1uh6l0u5zIAwohQs5Nx-Qx2wzQN-A4U2B=w756-h1007-no?authuser=0   this looks like the modern edition of what we had in our Coffeeshop, it was a shitload bigger too. 60A and indeed enough burned wires, not that a Thai cares... half the voltage…
BDawg467
There is not a bit of health and safety here in Thailand.  He is probably barefoot because he thought his flip flops might hinder him.  I doubt he was qualified to do whatever he was trying to do either.  No…