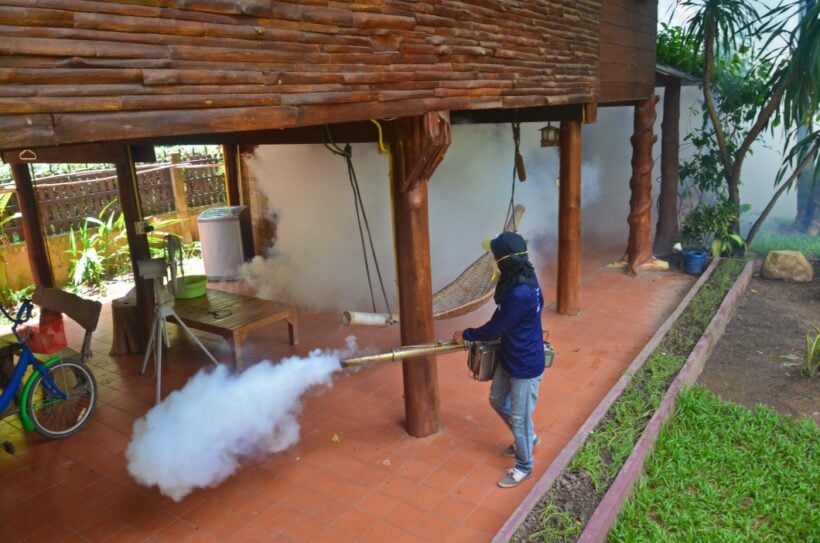 Thai health officials have issued a warning about a seasonal outbreak of dengue fever that may be more severe than normal. The Department of Disease Control says that while the focus is on preventing the spread of Covid-19, the risk of contracting dengue tends to be forgotten about.

However, so far this year, there have been 3 early deaths from the mosquito-borne illness. DDC chief Dr Opas Karnkawinpong says this is already half the 2021 total.

“Every year the incidence of dengue, along with that of other diseases such as diarrhoea, and heat stroke, rises sharply as summer approaches. Last year, only 6 people died because of dengue, while this year 3 dengue deaths have been reported in just the first 3 months.”

According to a Bangkok Post report, all 3 deaths were in people who were either recovering from, or being treated for, Covid-19. Opas says that a contributing factor in the severity of their illness was the use of non-steroidal anti-inflammatory drugs.

Opas has cautioned against using NSAIDs (examples include ibuprofen and high-dose aspirin) to treat high fever or other flu-like symptoms, saying patients should take paracetamol instead. He adds that while most dengue fever cases are detected in children and young people, most dengue deaths are reported in the elderly population, those with underlying illnesses, and patients categorised as obese.

Opas says a first priority around homes should be to get rid of any stagnant water. This will reduce the number of mosquitos in the area and decrease the chance of being bitten and contracting dengue.

Noble_Design
25 minutes ago, Pinetree said: It's a very nasty virus. I caught Dengue some 19 years ago and I still suffer the aftermath to this day. Covid held no fears for me after that experience, although I did my civic…
LoongFred
Dengue is a particular importance to falangs because of lack of previous exposure. Thais might have immunity from previous exposure. It's carried by Aedes mosquitoes that may bite in daytime. Problems can go on for a period of time after…

Soidog
50 minutes ago, Cabra said: Don't forget about Lassa, Marburg, Ebola and Hantavirus 🤪 Or being in a road crash, falling off a balcony, getting stabbed by an angry ex, or electrocution……
Saltire
Yep I don't fancy dengue at all! I sit outside most nights but in the rainy season here in Kanchanaburi, it's Mosquito Central. I have to wear a tshirt under a cotton long-sleeved shirt and still I can waken up…
alex12345
someones keeping the population in fear again ..ive been bitten hundreds of times but only a lump and some antihistamine cream and im fine again, yeah im not sure they bite through things but find a way up a leg…