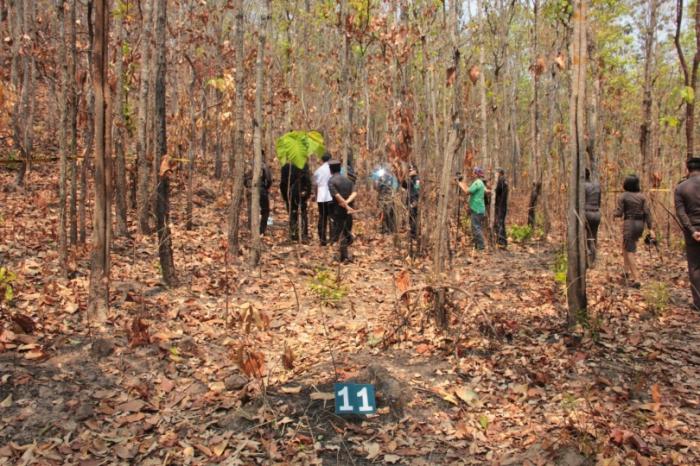 THE DNA test results of human remains found at one of 23 spots in the degraded forest of Udon Thani’s Ban Phue district have been released and are pending comparison with the 31 relatives of missing persons, deputy police spokesman Pol Colonel Krissana Pattanacharoen said yesterday.

The move followed the discovery in April of skeletons – many with signs of burning – in the forest between Pa Som, Sangkhom and Ban Phue. It is suspected that these people were burned on piles of rubber tyres in an attempt to cover up the murders.

Citing confirmation from Pol Maj-General Pornchai Sutheerakun, chief of the Institute of Forensic Medicine, that the DNA test results have been completed, Krissana however declined to elaborate on details such as the sex of the victims. He said it would be dependent on comparison with 31 relatives who have come forward with reports of missing persons.

Should the DNA samples match, police will go ahead with issuing summonses and arrest warrants, he said, adding that forensic tests in other spots should be completed by this month’s end.

Krissana affirmed that Provincial Police Region 4 and Udon Thani police investigators were working on hunting down the suspects linked to this site, but he could not reveal who the police had talked to, as it could affect the ongoing investigation.

Justice Minister Paiboon Koomchaya said the case was the Royal Thai Police’s responsibility and nobody had asked for the Department of Special Investigation to look into cases linked to that site yet.

In Udon Thani, eight relatives of missing persons yesterday submitted their DNA samples via buccal swabs or swabs from the inside of their cheeks. They included Rayong resident Saisamorn Chidcheua, whose younger brother Natthaporn has been missing in Udon Thani since 2002, and local woman Saowalak Khachamit whose older brother was abducted by three men claiming to be police in December 2008.

As for the recent transfer of three local police officers pending disciplinary probes, Peerapong said the order had been issued in a bid to ease witnesses’ worries so they could cooperate with investigators, and to prevent the tampering with evidence.

The transfer order came after Dara Pasai, 60, claimed to have been kidnapped last year by four strangers, who took him to the site where the skeletons were later found, and extorted Bt 260,000 from him. Some of the accused abductors were said to be policemen.

Peerapong said the transferred policemen had not yet been found guilty of any wrongdoing.