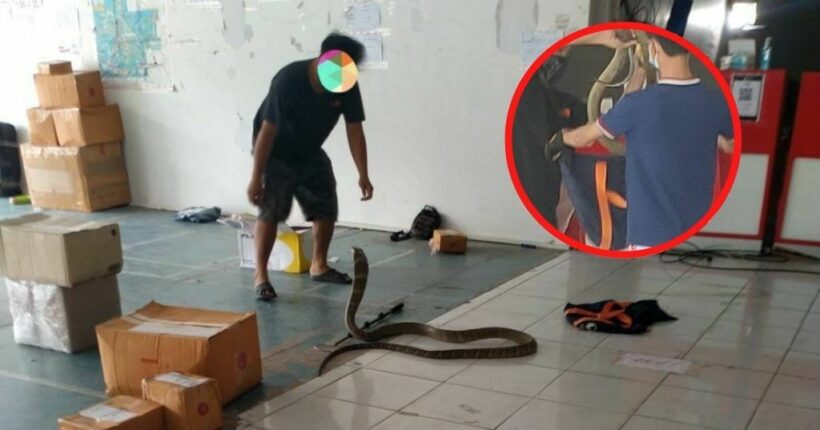 A 3-metre long king cobra – alive and likely agitated – was found in a package at a delivery company in Thailand’s Isaan region. Staff saw a cardboard box moving and could hear a hissing sound. They called a rescue team, who then opened the parcel and unzipped the black bag inside, releasing the long, venomous snake.

The delivery company has filed a complaint with the police. The sender has reportedly claimed to not know what was in the package, saying a friend had asked for them to send it.

Staff at Flash Express in Khon Kaen noticed the moving package yesterday and called rescue workers to inspect it. A rescuer opened the box and found a zipped bag inside. After unzipping the bag, the king cobra quickly slithered out. Everyone screamed and ran back for safety.

Rescue workers were able to safely catch the snake and send it to the King Cobra Village, a local tourist attraction known for snake shows, to take care of the cobra for the time being. The villagers there are familiar with king cobras and have been hosting snake shows for a long time.

The sender, who has not been identified in the media, reportedly claims that a friend asked for help sending a package and that they had no idea what was inside.

A rescuer says the king cobra is venomous and warned others not to send the snakes in the mail because it is not only dangerous, it is also animal abuse.

Noble_Design
Wow instead of hiring an assassin to kill someone, now they put the "biological weapon" in a box and mail it to the intended victim. I guess getting anthrax in Thailand must be difficult hence the need to use a…

palooka
saying a friend had asked for them to send it. Dumb dumb dumb, no one has believed that line for years. Lock him up.
Smiler
Would of been preferable to release it out in the wilds somewhere rather than to a tourist attraction.