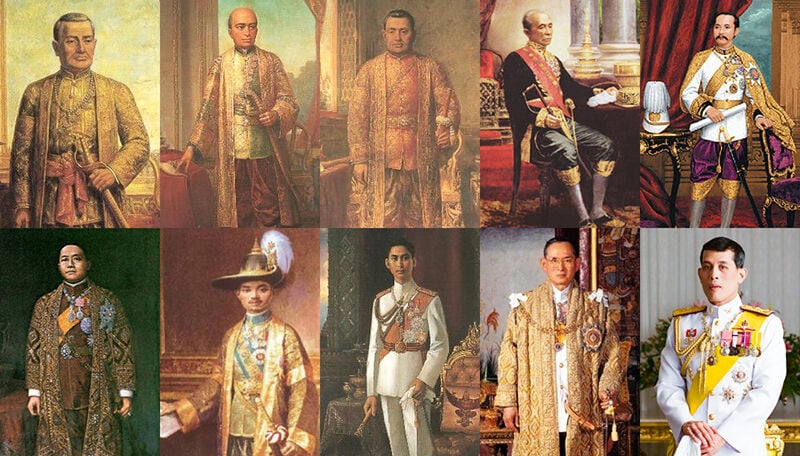 Portraits of Rama I-X, the the 10 kings of the Chakri Dynasty. Credit: Assumption University of Thailand

Chakri Memorial Day is an annual public holiday that’s observed on April 6 in Thailand. Officially called “King Buddha Yodfa Chulaloke the Great Day” and “Chakri Dynasty Memorial Day”, the holiday commemorates the coronation of General Chao Phraya Chakri as Phra Buddha Yodfa Chulaloke, aka Rama I, establishing the Chakri Dynasty in 1782. One of King Rama I’s first significant actions was to declare Krung Thep (eventually became known as Bangkok) the Siamese capital, moving the court from the west to the east bank of the Chao Phraya River.

Chakri Day is therefore a time to commemorate Rama I’s coronation. Practically speaking, it’s a day to celebrate the contributions of all the kings from the Chakri dynasty, including the current tenth king, Maha Vajiralongkorn aka. Rama X, who succeeded his father, the revered and popular King Bhumibol Adulyadej aka. Rama IX, after he passed away in 2016.

On this day, Thailand’s royal family will gather at the Grand Palace at the heart of Bangkok, where they will attend traditional Buddhist ceremonies at Wat Phra Kaew, or Palace of the Emerald Buddha, with the King presiding over the day’s events at the royal temple. He will also visit the Royal Pantheon, which is the largest building on the upper platform of the temple and home to life-sized statues of the first 8 Chakri kings. There he will pay respects to his forefathers, before visiting the Memorial Bridge, where he will lay a wreath at the base of King Rama I’s statue.

Because Chakri Day happens the week before Songkran, many Thais see it as a day to prepare for the upcoming there-day festival. In the event that April 6 falls on a weekend, the following Monday will be reserved as a make-up holiday, much to the delight of Thais, many of whom would likely try to take advantage of an extended Songkran. Chakri Day is also the only day of the year the public can visit the Royal Pantheon, where you can view the statues of the former Chakri kings. So today’s the day to check it off your Bangkok bucket list.

Both regular and tourist police forces remain on duty, while hospitals and shopping malls will stay open for the expected uptick in traffic. There’s no ban on alcohol sales on this day, so you’ll be able to pick up your favorite drinks at your local 7-Eleven or supermarket.

Meanwhile, government employees, schoolchildren and bankers all get the day off. Full-time employees at companies should also have the day off, according to Thai labour law, but some begrudging bosses may force an unfortunate few to work from home or — even worse — come into the office for a half day’s work. Bah, humbug.

Update: Bangkok is REALLY quiet today with traffic volumes down to 20% of the usually load.

DoUKnowWhoIAm
10 minutes ago, Thaiger said: while hospitals and shopping malls will stay open Is there any holiday when hospitals are closed? 🤔

Transam
LOH, Land of holidays.....🤔 Unfortunately for me, I needed to go to the bank today about a swallowed ATM card, and not by me.......🥴

Poolie
8 minutes ago, Transam said: LOH, Land of holidays.....🤔 Unfortunately for me, I needed to go to the bank today about a swallowed ATM card, and not by me.......🥴 Work, work, work. There's no rest for the wicked, mate. 😀

Soidog
1 hour ago, Transam said: LOH, Land of holidays.....🤔 Unfortunately for me, I needed to go to the bank today about a swallowed ATM card, and not by me.......🥴 It’s happened to us all. Part of the problem is that…
SJ1
it would be good if you at least explained what the word Chakri means, didnt occur to you? it is one of the names of God Vishnu and refers to how weapon (Chakra). Do some historic research too Thaiger? always…