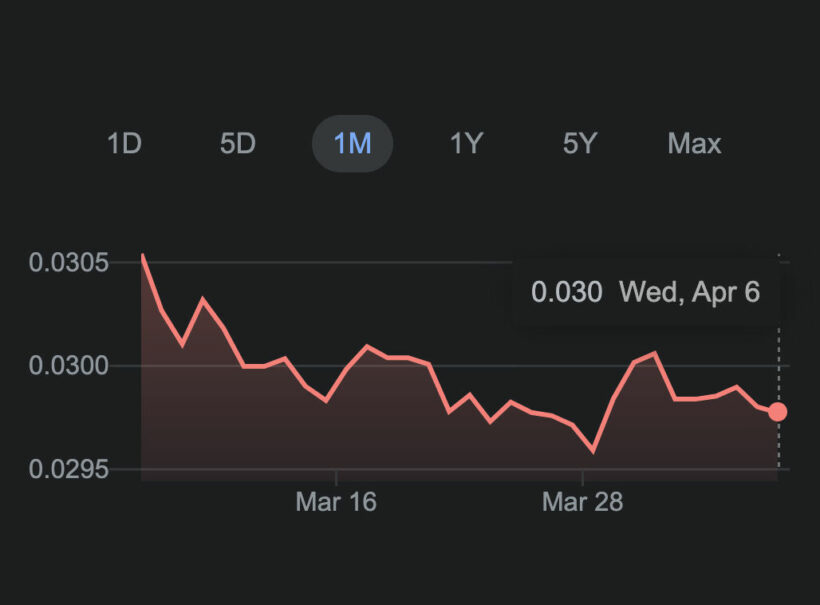 In March, Thailand’s inflation saw its highest monthly jump in 13 years, rising to 5.73% year on year. That’s according to the Commerce Ministry’s Office of Trade Policy and Strategy, which pins the blame on the war in Ukraine, which has pushed up fuel, food and electricity prices.

This unexpected turn of events has caused the office to adjust its figures for the year, which they had hoped would be one of recovery for the languishing Thai economy after two years of pandemic. In response, the office has increased its 2022 inflation projection to 4.5% from 0.7%-2.4%, after recording an average monthly inflation rate of 4.75% in the first quarter. The new projection was set assuming a growth rate of 3.4-4.5%, a crude oil price average of 90-110 USD a barrel, and a THB-USD exchange rate of 32-34 baht per dollar.

Meanwhile, consumers are feeling the real-world bite of a higher inflation rate. In March alone, energy prices increased by 32.43%, nearly a third more expensive than in February. Oil prices saw a 31.43% increase, while electricity increased nearly 40%. Prices have also surged at the supermarket, with dairy products up more than 6%, vegetables up nearly 10% and meat up more than 5.7 percent. Naturally, street food has also been affected, with prices for common dished such as curry and noodles up more than 8%, according to Thai PBS.

If that’s not bad enough, those in Thailand should expect things to get worse before they get better. The office predicts inflation to continue rising this month as the war in Ukraine continues and global oil prices fluctuate, while the cost of gas for cooking also increased. On the bright side, the office says those in Thailand won’t have to worry about the triple whammy of stagflation – i.e. high inflation, high unemployment and slow or negative real economic growth — IF the government implements more measures to stimulate the economy, promoting the growth and recovery of the tourism and export sectors this year.

palooka
4 hours ago, Pinetree said: worked out my own inflation increase just 2 days ago, Petrol and food costs, plus increase in electricity, I recon 10% increase in my personal costs over the past 12 months. Brutal if this continues. …

Soidog
Oh this is bad economic news. I had better exchange some money before the Baht strengthens. Bad economic news in Thailand such as military coups, political instability, loss of 12% GDP for 2 years = Strengthening Baht Boris Johnston…
MrNovax
This will not end as long as Thailand's central bank keeps printing money to keep the baht "weak" against other currencies. Inflation is the printing of money, rising prices is often the result of inflation. Stop printing money = no…
Saunk
So convenient for all governments to blame the Russia/Ukraine war for inflation when it's really the money printing that is the cause for most countries being in hyper inflation.

Poolie
50 minutes ago, Saunk said: So convenient for all governments to blame the Russia/Ukraine war for inflation when it's really the money printing that is the cause for most countries being in hyper inflation. The CPI in Thailand is under…